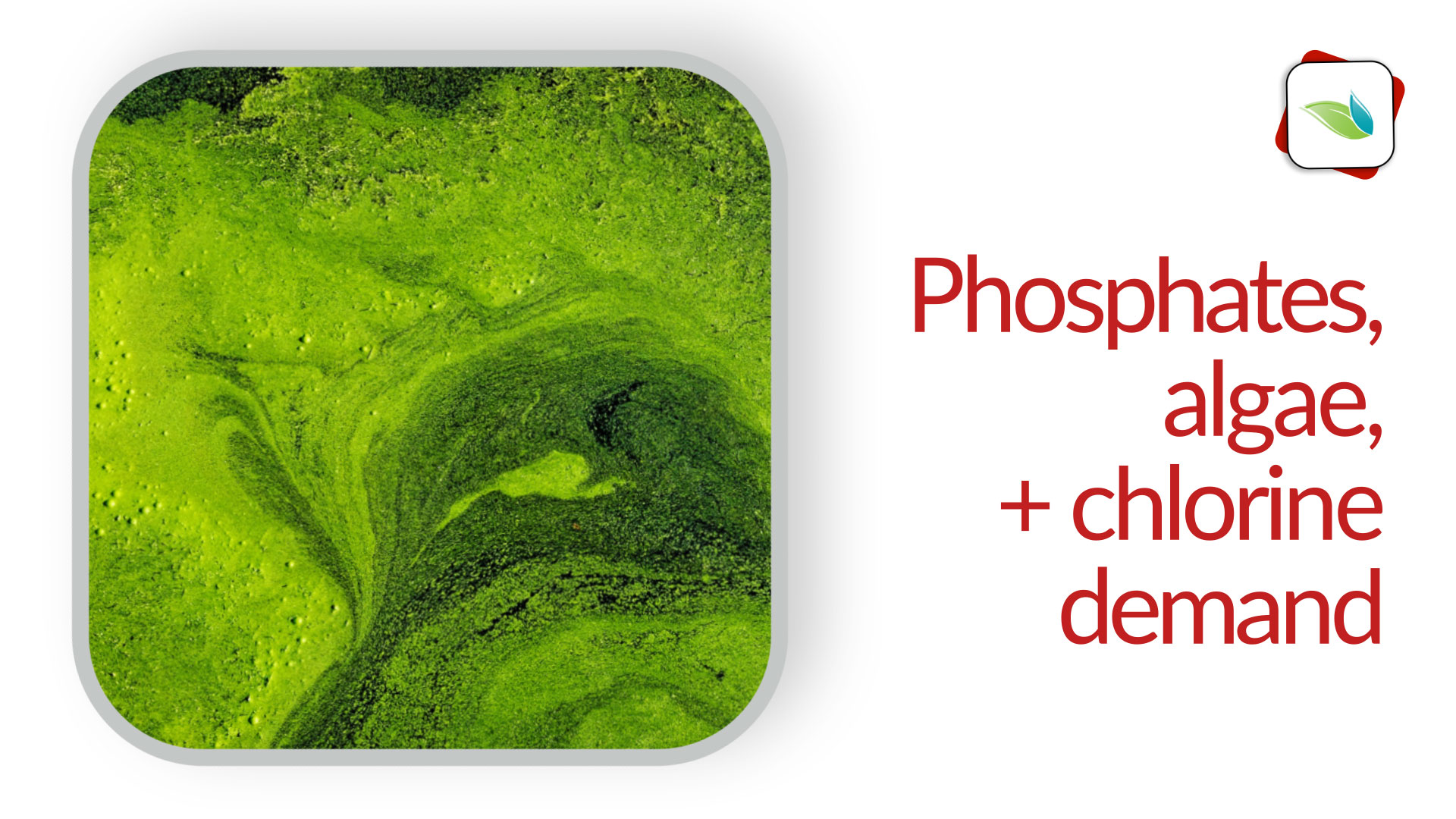 High phosphates seem to weaken chlorine, as evidenced by low chlorine readings, lowered ORP, and the most visual of all evidence: algae. What’s really going on?

Chlorine demand is an expression used to describe everything that chlorine has to deal with in the water. It includes non-living oxidants, called the oxidant demand (metals, nitrogen compounds, non-living organics and oils), and living contaminants, called the sanitizer demand (germs, bacteria, viruses, mold, and algae).

Chlorine's secondary role is oxidation. Compared to its strength as a sanitizer, chlorine–even in its powerful form, Hypochlorous Acid (HOCl)–is a relatively weak oxidizer. According to the IPSSA Basic Training Manual (emphasis added):

“The primary purpose of disinfection is to kill pathogenic (disease-causing) organisms such as bacteria, parasites, viruses and other organisms such as algae, mold, mildew and spores. The secondary purpose [of chlorine] is oxidation of swimmer waste such as sweat, urine, saliva, mucous and other bodily fluids. In addition, we need to oxidize or destroy all the man-made and natural creams, sunblock, soap, oils, deodorants, makeup, lipstick, lip gloss, hair spray, hair conditioner, styling gel, perfume, cologne, foot powder and baby powder to name a few.” 1

Chlorine has a lot to deal with; mostly non-living oxidants. These oxidants occupy chlorine's attention and reduce it. In other words, chlorine gets used up on oxidants, and therefore the pool demands more chlorine to handle the contaminant load.

That's a lot of chlorine. A similar process is required for oxidizing nitrates into nitrites. And nitrates and nitrites are relevant because, like phosphates, they are nutrients for microorganisms like algae.

"Nutrients are present in several forms in pools and spas including dissolved inorganic, dissolved organic, particulate organic and biotic forms. Only dissolved forms are directly available for algal growth: for nitrogen and phosphorus these include Ammonia (NH4), Nitrate (NO3-), Nitrite (NO2-), Orthophosphate (PO4-3), as well as dissolved Carbon Dioxide (CO2) and dissolved Silica (SiO2)"2

Addressing these nutrients is helpful for keeping your pool clean and clear because simply killing organisms is only half the battle.

Orthophosphates do not directly interact with chlorine, and are therefore not directly part of the chlorine demand. But chlorine efficiency and phosphate levels are indirectly related. According to Richard Falk, this is mainly due to the growth and reproduction rate of organisms like algae.

Without getting into too much detail, phosphates are a building block nutrient for living organisms. We cover phosphates in more depth here, and talk about the different types we deal with in swimming pools here. Removing phosphates to stay below 500 ppb is our Third Pillar of Proactive Pool Care. 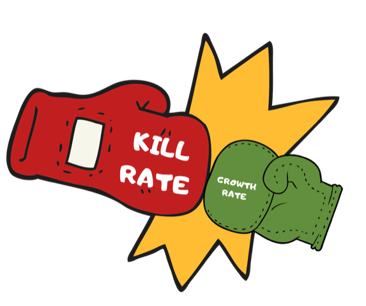 When the growth and reproduction rate of a microorganism exceeds the killing rate of chlorine, you are likely to have an outbreak–like algae. Living things need both nitrogen and phosphorus as micronutrients. In swimming pools and spas, nitrates provide nitrogen, and orthophosphates provide the phosphorus.3

With ample micronutrients present in the water, bacteria and algae can potentially grow faster than chlorine can kill them. According to renowned pool chemistry expert, Richard Falk:

"The rate of chlorine kill is the same [with high phosphates], but the rate of growth can be slower with low phosphates. It's a race of reproductive growth that is faster with more phosphates (up to a limit determined by sunlight and temperature) vs. killing by chlorine.”4

This explains why chlorine demand tends to be higher with high phosphate levels. It’s not that phosphates directly affect chlorine’s strength, it's that they help fuel sanitizer demand. Those contaminants are constantly being attacked by chlorine, which reduces chlorine.

That needs to be repeated: phosphates have no direct relationship with chlorine strength. Rather, the difference phosphates cause is in the growth rate of contaminants like algae. That growth rate is what raises the chlorine demand, not the phosphates themselves.

Visualize a green pool, full of algae. It’s nasty. Do you see it in your mind? A pool service tech knows to shock a pool to kill the algae, and usually, it works. But have you ever shocked the pool, and come back the next day to see it’s still murky and green, but you have almost no free chlorine? It’s not uncommon to come back to a zero chlorine reading shortly after shocking an algae pool. But how?

Algae hold phosphates within their cell walls. So when chlorine kills it, those nutrients are released back into the water. And in the right conditions, a new generation of algae can grow…only to be killed by residual chlorine.  And again, and again, and again. Eventually you have no more chlorine, because you lost the war of attrition. The IPSSA Basic Training Manual states:

So if algae can double in 3 to 8 hours, it can multiply several times each day. That’s quite a burden on chlorine…on top of everything else it has to do for the water. Let’s go back to Richard Falk:

"Phosphate removers should not be used to clear an existing algae bloom since the oxidation of algae will release additional orthophosphate. Use them after clearing algae from a pool."

In other words, you could test zero phosphates in a green pool (and we have, many times) because the orthophosphates are inside the algae. When chlorine or an EPA-registered algaecide kills the algae, those phosphates are released. 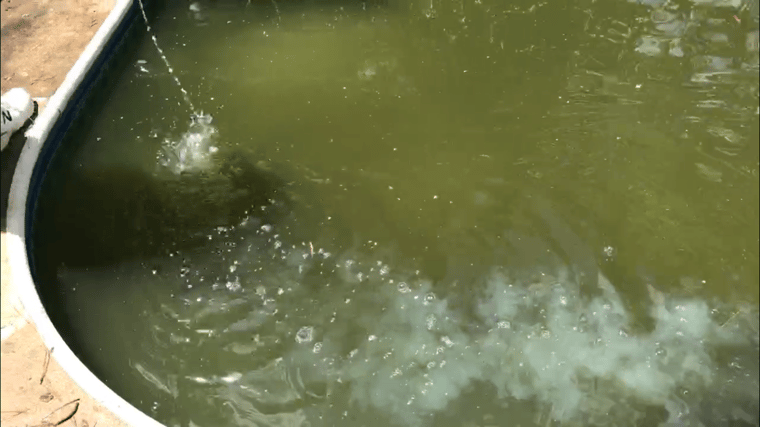 A solid one-two punch to clear an existing algae bloom is to shock with chlorine and follow it up with a phosphate remover like PR-10,000. Chlorine kills the algae, and phosphate remover wipes out the orthophosphate. Kill the colony once, not every 3-8 hours until you run out of free chlorine.

If you experience higher chlorine demand with high phosphates, we hope this article simplified the science behind it. Phosphates are just one piece of the puzzle, and a critical piece indeed. Reducing phosphates is beneficial, especially when you're dealing with elevated levels of CYA.

Be sure to keep the killing speed of chlorine faster than the growth and reproduction rate of contaminants. For more information on optimizing chlorine's killing speed, you can take our Four Pillars Orenda Academy™ program, or read Pillar 2 and Pillar 4.

4  This quote is from an email conversation with Richard Falk, but it was in regards to questions we had about his posts on Pool Genius Network's website regarding phosphates and chlorination. If you have not already read it, it's worth the read.