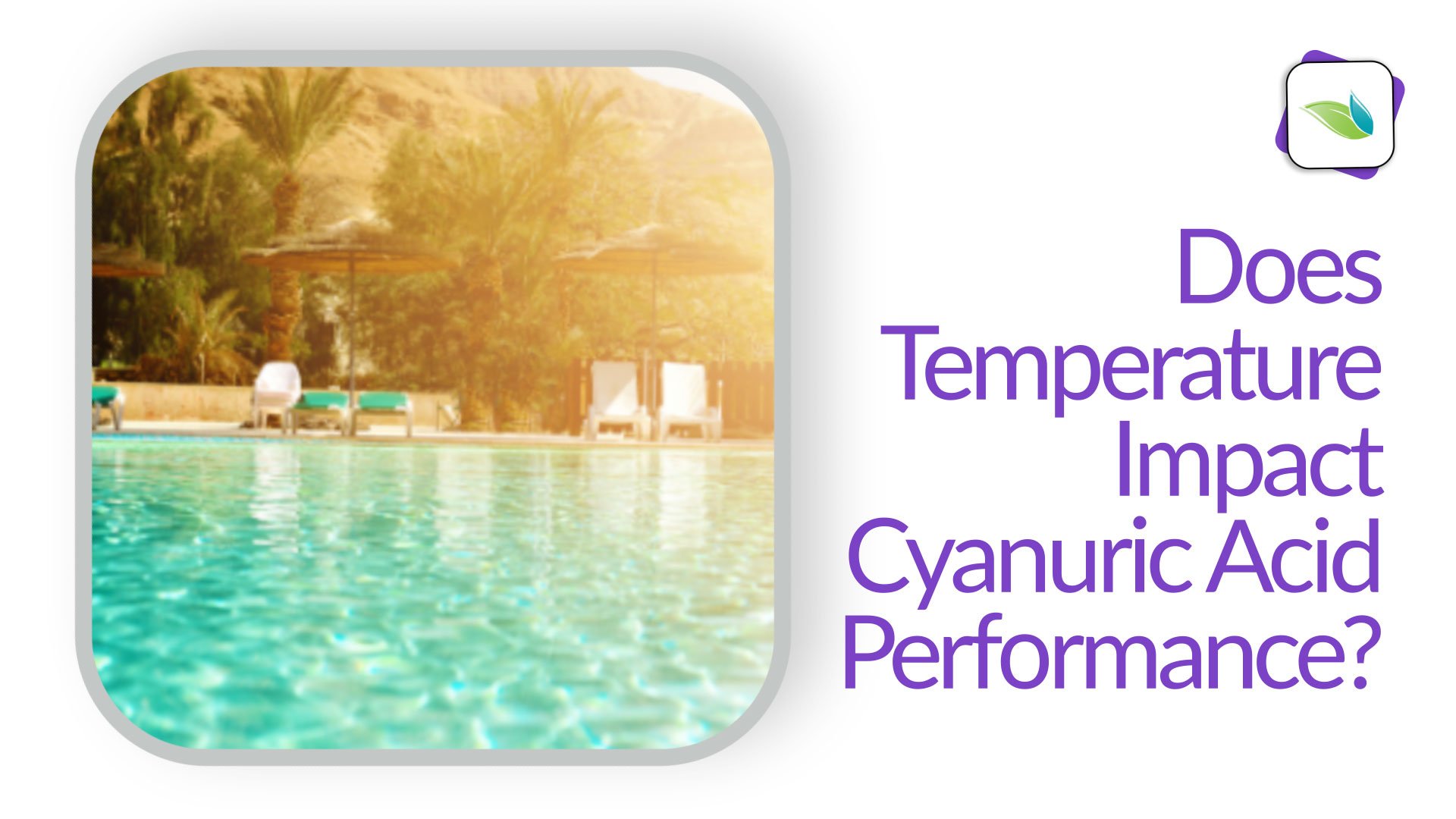 Today we are discussing two of the six LSI factors: water temperature and cyanuric acid (CYA). Specifically, does warmer temperature affect CYA's ability to protect sunlight? There is a widespread belief in the industry that hotter weather means you need higher CYA to protect chlorine from sunlight. So we asked a leading expert about what's really going on.

Why CYA is used in pools 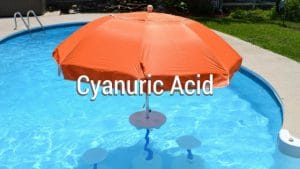 CYA is a double-edged sword, but is necessary for most outdoor pools. Its main benefit–perhaps its only benefit–is it protects chlorine from UV degradation. Without CYA in the water, direct sunlight can destroy half of your free chlorine in just 45 minutes, and another half the next 45 minutes. That means in just 90 minutes, you are down to 25% or less of the chlorine you started with.

CYA binds to chlorine and protects it from sunlight until it is time for the chlorine to release itself to go kill or oxidize a contaminant.

Chlorine that is bound to CYA is called isocyanurate, and it will show up on a free chlorine test kit. Isocyanurates are much slower to disinfect than free Hypochlorous Acid (HOCl), which is why CYA controls the strength (and killing speed) of chlorine. In fact, because CYA moderates chlorine's speed, a scientific argument has been made for using a very small amount of CYA on an indoor pool to reduce the rate of chlorine consumption and disinfection byproducts.

The name of the game with stabilizer is to have enough for sunlight protection, but not too much that it slows down your sanitizer too much. We call that condition overstabilization, and it's a huge problem for swimming pools around the country. And as you can see from the chart below, a little bit of CYA goes a long way: 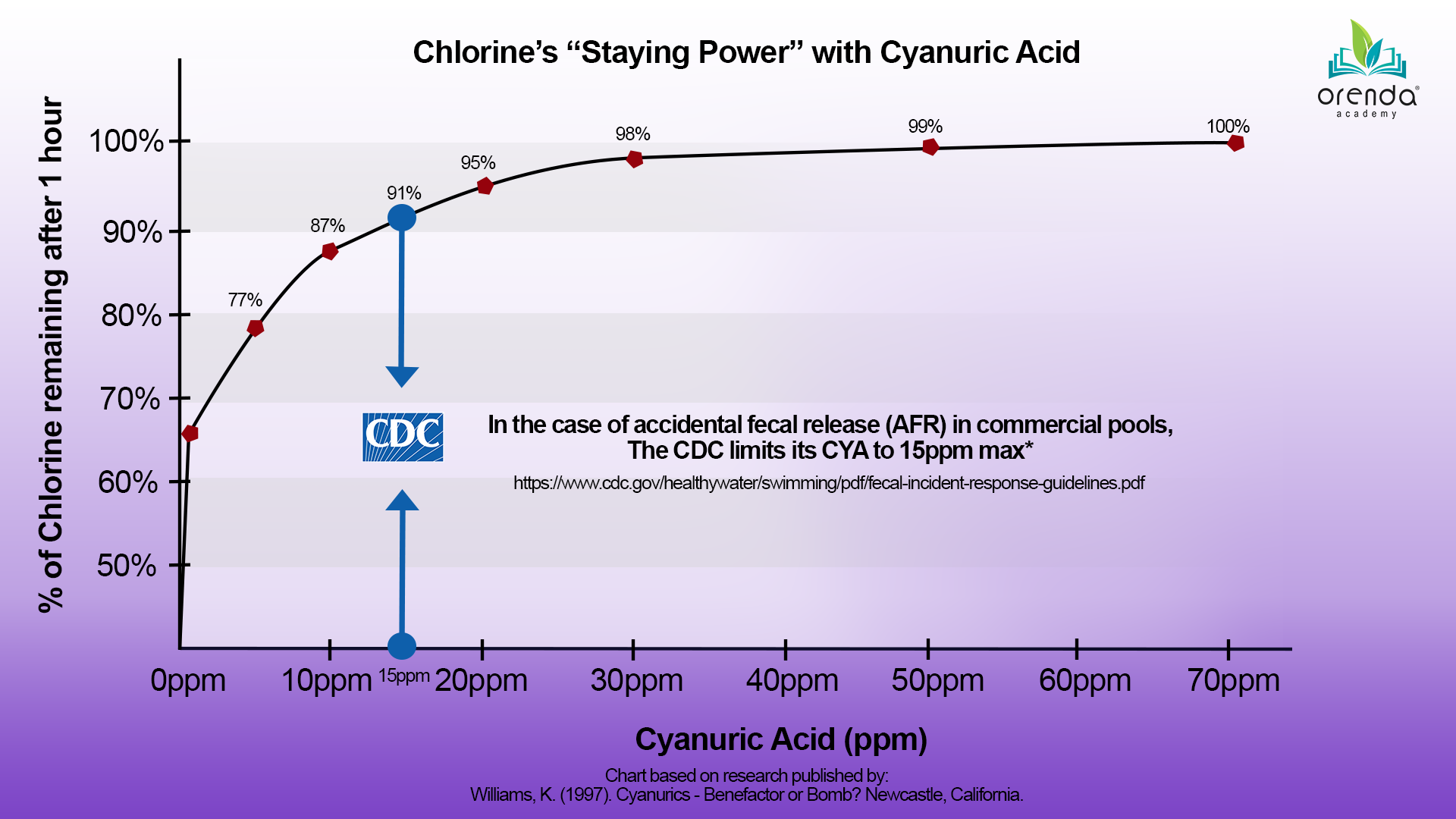 Notice we said it is UV from sunlight that breaks down chlorine. Water temperature has nothing to do with it. But there is a correlation between water temperature and chlorine consumption, and explaining that correlation is the main reason for writing this article in the first place.

When we began to research this question, we struggled to find good information online. So we went directly to the water chemistry guru himself, Richard Falk. With Richard's permission, we'll share some excerpts from our email exchange:

"For uncovered pools, the chlorine loss is a combination of breakdown from sunlight, which is independent of temperature, and oxidation of organics (usually from blown-in debris). And if active chlorine (FC/CYA ratio) isn't high enough–relative to phosphate levels–then there can also be chlorine demand from killing algae, just barely keeping it at bay." - Richard A. Falk

This somewhat confirms what we suspected. Warmer temperatures accelerate chemical reactions in general and also accelerate the reproduction rate of algae, which is a constant threat to summer swimming pools. The other side is the oxidant demand, which is primarily non-living organics.

We know all about non-living organics; that's why addressing them properly by supplementing chlorine is our Second Pillar of Proactive Pool Care. The warmer the water, the faster chlorine (and all other chemical reactions) can go, so it makes sense that chlorine gets used up faster in warmer water. You can mitigate the oxidant demand by addressing organics with enzymes.

So no, CYA's sunlight protection is independent of temperature. You do not need more CYA when the temperature goes up, though summer days are longer, with more hours of direct sunlight. Sure, those extra hours of sunlight matter, but the hotter temperature does not. That being said, swimming pools will often experience a more rapid reduction in chlorine for other reasons–like oxidant demand and reproducing algae–that more CYA cannot help with. If anything, more CYA will continue to slow down chlorine...so when you test free chlorine after a week, it might be more, but was it really a victory?

pH impacts chlorine degradation, but the temperature does not


We recently published another article about how CYA overpowers pH when it comes to controlling the strength and speed of chlorine (% HOCl). In that article, we argue that pH is virtually irrelevant to the strength of chlorine when CYA is present, based on the data available. At least, until the pH gets well over 8.0 and Hypochlorite Ion (OCl-) begins to break away from CYA and become vulnerable to sunlight degradation again.

And that's not just our opinion. We got it from a study by Dr. Stanley Pickens.

You can see how little the red line (HOCl) moves in the chart on the right below. But also look at the rise of the green line at higher pH's:

As you can see, the red line (HOCl) percentage stays below 3% and gradually decreases as the pH goes up. But the green line, Hypochlorite Ion (OCl-) climbs as the pH increases. Its increase is directly proportional to the decrease of the blue line, isocyanurate. This means as the pH rises, more OCl- breaks away and becomes exposed to sunlight. Here's what Richard said:

"Don't forget that the breakdown of chlorine in sunlight is VERY pH dependent because hypochlorite ion breaks down much faster than hypochlorous acid, and with CYA in the water, higher pH doesn't have HOCl drop very much, but it has hypochlorite ion rise a lot (since CL-CYA and OCl- are in equilibrium)." - Richard A. Falk (colors added by Orenda to match graphs above)

Whew, there's a lot to unpack here, so here are some bullet point takeaways:

Then Richard threw a curveball we were not expecting.

"Also, in all pools using CYA, chlorine slowly oxidizes CYA itself.  At normal warm pool temperatures, the CYA loss is around 3 ppm per month and it takes 2.5 ppm FC to oxidize 1 ppm CYA so oxidation of 3 ppm CYA per month translates to 7.5 ppm FC per month or 0.25 ppm FC per day.  Some pools show higher loss mostly due to higher temperature and higher pH that accelerates this reaction.  In hot spas using dichlor, the loss is typically 5 ppm CYA per month.  In pools that would be 0.42 ppm FC/day.  Some people report higher but I suspect that includes loss of CYA from water dilution." - Richard A. Falk

You heard it here first, quoted directly from Richard, a primary source who sits on the CMAHC ad-hoc committee for cyanuric acid. This is something we never knew, and to be honest, we're not sure it has processed yet. We were under the impression that CYA just accumulated and nothing short of specialized bacteria and draining could reduce it. But apparently chlorine itself can turn on its protector, cyanuric acid. Because it's such a slow rate of oxidation, this may not really be noticeable in most pools. But hey, this is actually good news, because being able to reduce CYA in swimming pools is a good thing.

We wrote this article to debunk the notion that higher temperatures mean you need more CYA to protect chlorine. While chlorine does get reduced faster in warmer water, it has nothing to do with CYA's sunlight protection. Rather, this increased rate of chlorine consumption is due to an increased oxidant demand. Sunlight protection is independent of temperature. So no, you do not need higher CYA levels in the summer. The sun is the sun, regardless of temperature.

We should not underestimate the chlorine reaction rate either. Warmer water means chlorine works faster, though this is independent of sunlight protection.

We credit Richard Falk and thank him for helping us on this topic, as he is our primary source, and he was kind enough to take the time to answer our questions. Along the way, we learned fascinating things about CYA that we never knew, like pH being higher means chlorine can be consumed faster. Higher pH means more dissociation of OCl- from CYA, and that dissociation means OCl- is now vulnerable to sunlight degradation. This is not to be confused with chlorine being weaker (% HOCl), because chlorine is not really weaker at a higher pH with CYA in the water.

If you have questions, we would love to hear from you!  Comment below.