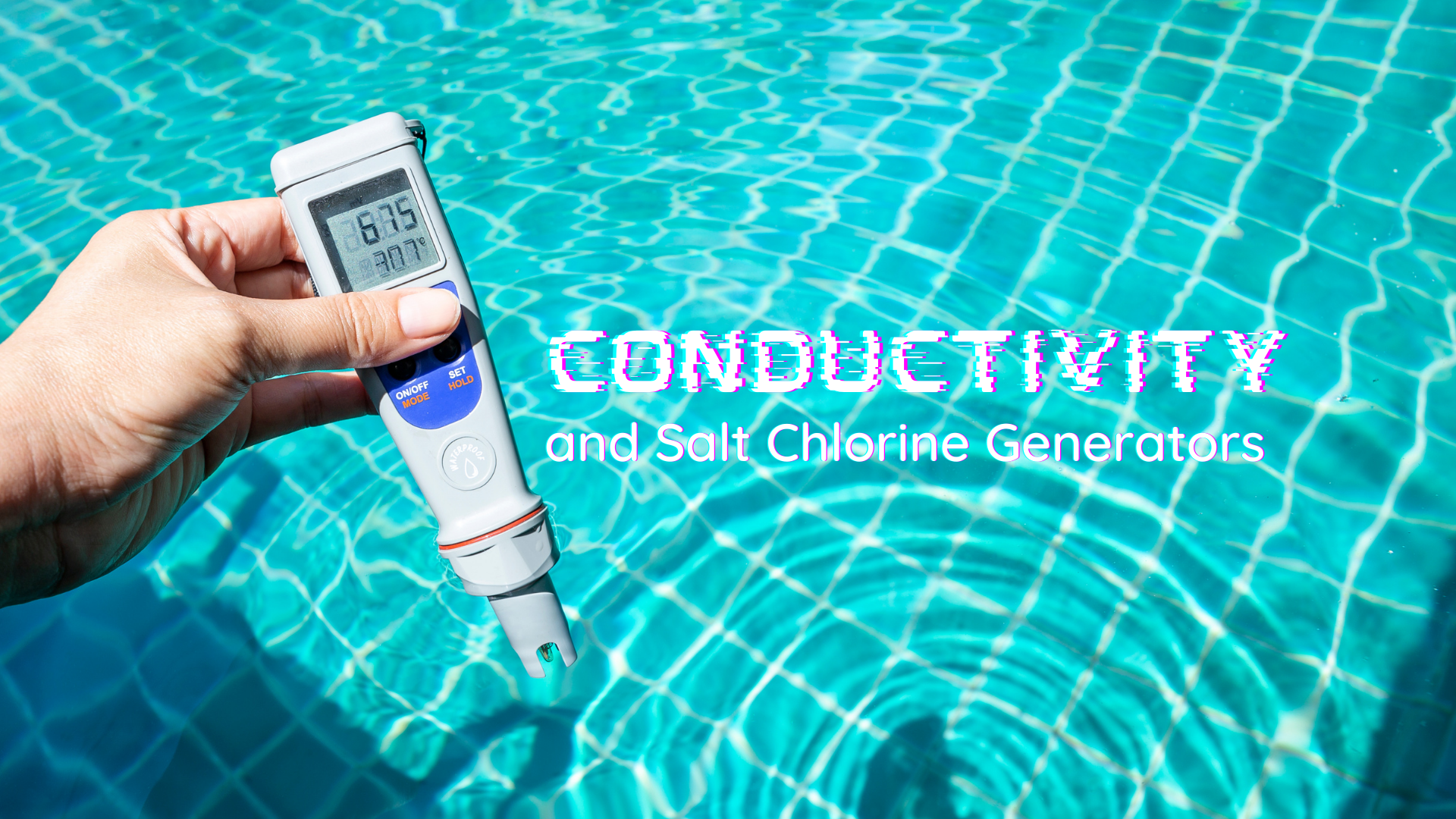 In this article, we discuss how salinity and water temperature affect saltwater pools; specifically how they affect the performance of a salt-chlorine generator.

Salt systems (aka saltwater generators, or SWGs) create chlorine by running electricity through salt water. The process is called electrolysis, and it converts chlorides into chlorine gas, with some other byproducts. The reaction looks like this:

Another way of looking at this is to separate the sodium from salt (NaCl), because when salt dissolves in water, the sodium separates from chloride. Let's just look at the reaction with chloride itself:

There are two key things to know about salt system chemistry. First, chlorine gas is produced, which is acidic, and it neutralizes the high pH of the hydroxide produced. Second, the pH rises because Hydrogen gas (H2) does not dissolve in water...it off-gasses, creating aeration which also leads to off-gassing carbon dioxide (CO2). As you may know from our other article, the loss of CO2 raises the pH.1 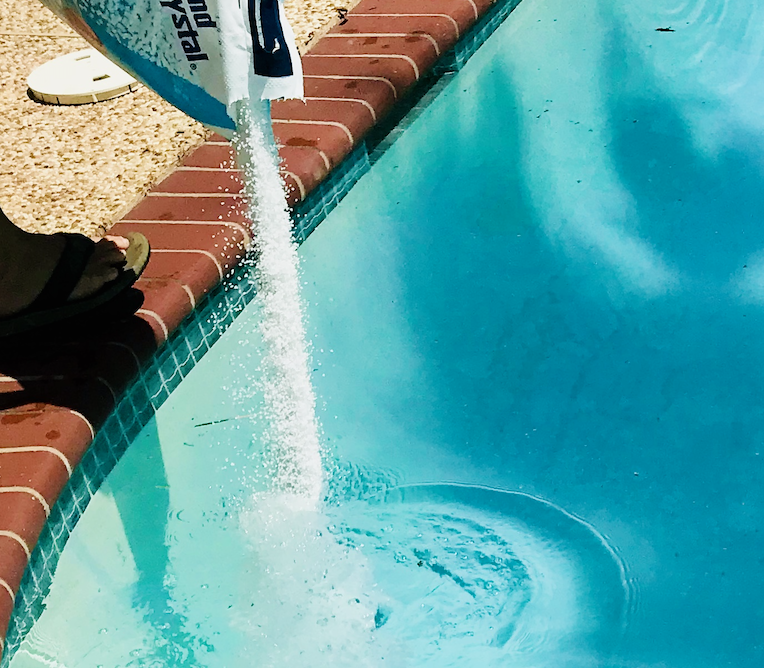 Salt systems work best when the salinity levels are within manufacturer-recommended ranges. For most salt systems in the pool business, that range is typically between 3000-3800 ppm of salt. Optimum salinity, on average is about 3200-3600 ppm salt. Consult your salt system manufacturer's manual for specific recommendations for your system. You need enough salinity for optimal conductivity, but not too much.2

Without enough salt in the water, the conductivity of the water is low, so it takes more energy to send electricity through the water. This puts stress on the salt cell. To protect itself, the salt system usually has an alarm and a cutoff point, which will shut the system off altogether if salinity levels are too low or too high. Yes, there can be too much salinity too, which makes the conductivity so high that not enough electricity is run through the system to effectively create chlorine.

Depending on the salt system, the minimum salinity level is usually around 2700-2900 ppm, and the maximum recommended is about 4500 ppm. Again, these levels can vary based on the type and manufacturer of the salt system you have. 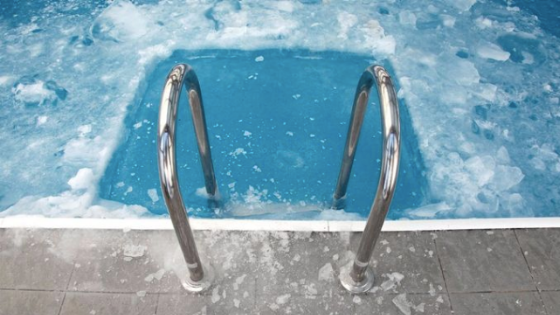 The other factor that drives conductivity is water temperature. Warmer water makes electrolysis easier and more energy-efficient, similar to having more salinity. Cold water is the opposite–it takes more energy to conduct electrolysis and create chlorine. In cold enough water, salt systems will shut off to protect themselves. Too much electricity can stress the system.

We asked some of the major salt system manufacturers what their temperature minimum was, and most of them were between 55-59ºF. That's the threshold where salt cells will alarm and/or shut off. According to the IPSSA Intermediate Training Manual, lower temperatures may also cause the Ruthenium coating on the salt cell to fail prematurely. So the temperature alarm and shutoff protect the cell not only from electrical stress but also from degradation.3

The LSI teaches us that lower temperatures and higher TDS both make water more aggressive. So while higher salinity may improve conductivity, it also reduces the LSI, so that's something to be mindful of.

Many of the questions we get at Orenda are about ways to better maintain salt pools to manage LSI balance throughout the year (Pillar 1). Don't worry, we've got you covered. We did a Rule Your Pool Podcast episode on that very topic:

In short, you should have enough calcium hardness to allow you to have less than 80 ppm TA when the water is warm enough for the salt cell to be working well (over 60ºF or so). In colder water, aim for a TA of about 80 ppm or more, specifically to maintain LSI balance.

Perhaps the most common issue we hear about with saltwater pools is calcium flaking. We have an entire article about it, but let's briefly touch on what's going on. 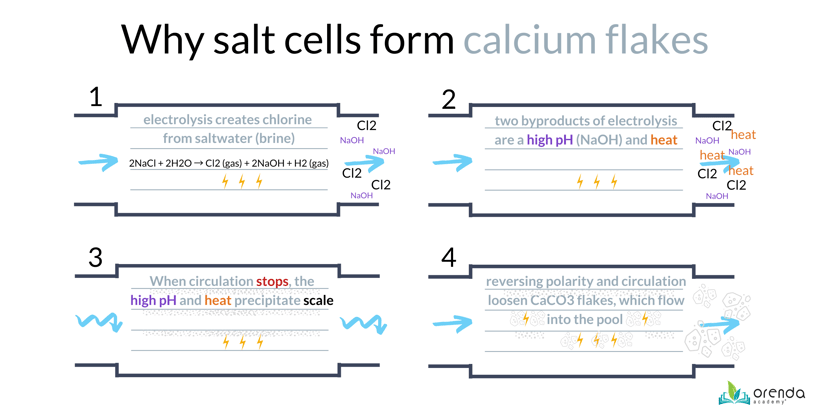 Electricity passes from the anode to the cathode (on either side of the metal blades in the salt cell). The cathode side produces a 13+ pH sodium hydroxide (NaOH), while the anode side produces a very low pH chlorine gas (Cl2). The high pH of sodium hydroxide leads to scale formation on the cathode, especially when the circulation system shuts off and water remains stagnant in the salt cell.

When the cell reverses polarity (electricity changes directions and the cathode becomes the anode), the low pH chlorine gas loosens the scale from the blade and it fractures off into flakes. Those flakes flow into the pool through the return line. Learn how to prevent calcium flakes here.

Chlorine gas is acidic, and sodium hydroxide is basic. They neutralize each other's pH. All that's left is off-gassing Hydrogen gas, which creates aeration, causing the loss of CO2 (in the form of carbonic acid). That loss of CO2 raises the pH.

This is worth repeating. It's the loss of CO2 in the salt cell (caused by Hydrogen gas bubbling off) that causes the pH to rise in saltwater pools. For years, we–and most of the pool industry–thought it was sodium hydroxide that raised the pH. And it would raise the pH, if not for the acidic chlorine gas (Cl2) that neutralizes it.

And speaking of chlorine gas, one other thing to consider is the length of pipe from the salt cell back to the pool. If it's a short run of pipe, and the return inlets are aimed up at the surface (especially the return closest to the equipment pad), there's a chance that chlorine gas may not have quite enough time to dissolve all the way. You could potentially lose some, which could cause the pH to rise faster.

All is well, however, if you are containing pH with reduced carbonate alkalinity. Because even if your pH is being driven up by the salt system, your pH can only go up to its ceiling. Anything beyond that, and the atmosphere will force CO2 back into the water, keeping your pH at its equilibrium point (ceiling). See the chart below: 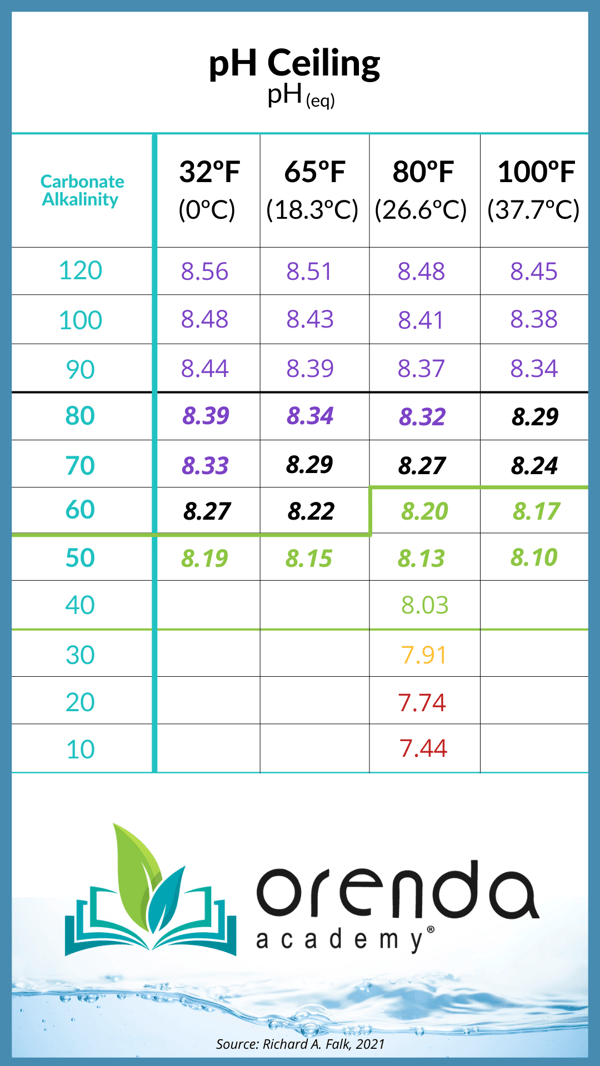 So a salt system has a net pH rise due to the loss of CO2, which can be accounted for in our strategy for containing pH using Henry's Law of physics.

In summary, most pool professionals we speak with have a habit of adding more acid than necessary in saltwater pools. We as an industry have been conditioned to think salt cells always raise pH no matter what, and we have to knock down that pH with acid every week. But we're here to tell you that you can limit how high the pH can go by limiting your carbonate alkalinity. Use physics to your advantage.

How to winterize a saltwater pool, the Orenda way

Winterizing the Orenda way means focusing on LSI balance in the coldest water your pool may have. With saltwater pools, this means adjusting not only calcium hardness but also raising your total alkalinity as the temperatures drop. This is mainly because we recommend lower TA levels (50-60 ppm) when the water is warm enough for the salt system to operate. When the water is in the low 60ºs, the salt system is soon to stop working, so it's time to raise the TA up to about 80 ppm for the winter. And be aware of the type of safety cover on the pool (if applicable). The type of cover you have affects the chemistry you will need for winterizing.

Everything else in our winterization procedure remains the same.

1  Special thanks to Richard Falk for explaining this chemistry to us in several emails and phone calls. This concept was not easily understood at first, but we hope we have explained it clearly and accurately.

2  As an aside, salinity readings on salt systems may only be telling you the salinity, not TDS. But some may be telling you TDS. It depends on the system. You would be wise to find out what your system is sensing in the water. We also advise manually testing with a salinity meter periodically to avoid overdosing salt. If a salinity sensor on a device is faulty (or not properly calibrated), it can read lower than it actually is. Back up your readings with a second probe if something looks out of the ordinary. 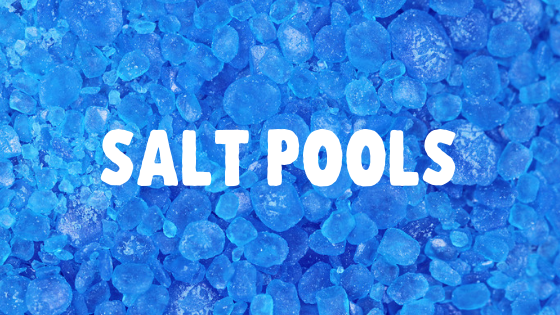