How to Prevent Scale in Pool Heaters and Salt Chlorine Generators

Go back to main blog

Carbonate scale tends to form in the hottest water first...usually inside saltwater chlorine generators (salt cells) and heat exchangers. This is a function of the Langelier Saturation Index (LSI), as higher temperatures increase the tendency for scale formation. In this article, we will give you some simple tips for preventing scale formation in both of these places.

What causes calcium to form Scale? 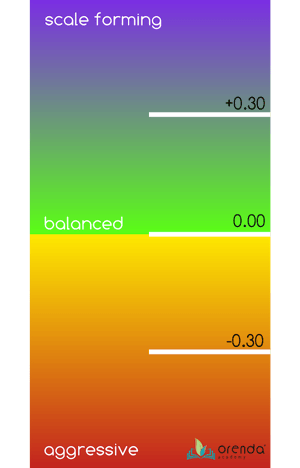 Some sources make the case that alkalinity combines with calcium hardness to form scale...and while in some cases that’s correct (carbonate ions bind to calcium to form calcium carbonate, CaCO3) alkalinity itself is not as strong of a factor as pH, and maybe even water temperature. The primary LSI factor that drives calcium precipitation is a high pH, but the location of calcium precipitation is often driven by water temperature.

Another comment about these four factors. Calcium hardness is much less of a driver of scale formation than many people think. For example, there is conventional wisdom in the pool business that you can prevent scale by keeping calcium hardness low. What they don’t realize is calcium hardness is actually your best friend because of its stability; calcium is a solid foundation to build your water chemistry strategy upon. It’s so important, calcium management is our First Pillar of proactive pool care.

Related: The most misunderstood chemistry in the pool business

Why would water precipitate calcium in the cold depths of the pool when there’s a warm heater or salt chlorine generator? After that, the next warmest location would be a sunny tile line or spillway. We have known the behavior of scale from decades of field experience being pool service technicians. But only recently did we come to understand the LSI, and it validates our assumptions. It now makes perfect sense why scale forms in the hottest places first. Hot water makes it easier for calcium to fall out of solution, plain and simple. 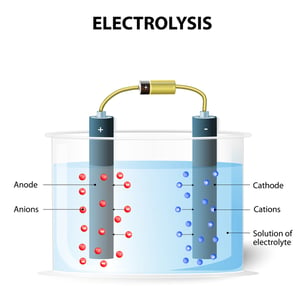 Salt chlorine generators are also called “salt cells”, or “saltwater generators” “SWG”, etc. They all refer to the same thing. Saltwater pools use a process called electrolysis to generate chlorine from sodium chloride (salt). This process involves electricity. The byproducts of this electrolysis are what lead to scale formation: heat and a very high pH substance called sodium hydroxide.

Sodium Hydroxide’s 13 pH is extremely high, or basic. Sodium hydroxide is also called ‘caustic soda’, and is basic enough to precipitate scale by itself, if concentrated enough. Combine that with the heat generated between the blades of the salt cell during electrolysis, and we have a super-high LSI chamber with water passing through it. It's no wonder scale forms in salt chlorine generators. But what can be done to prevent scale from forming in there? 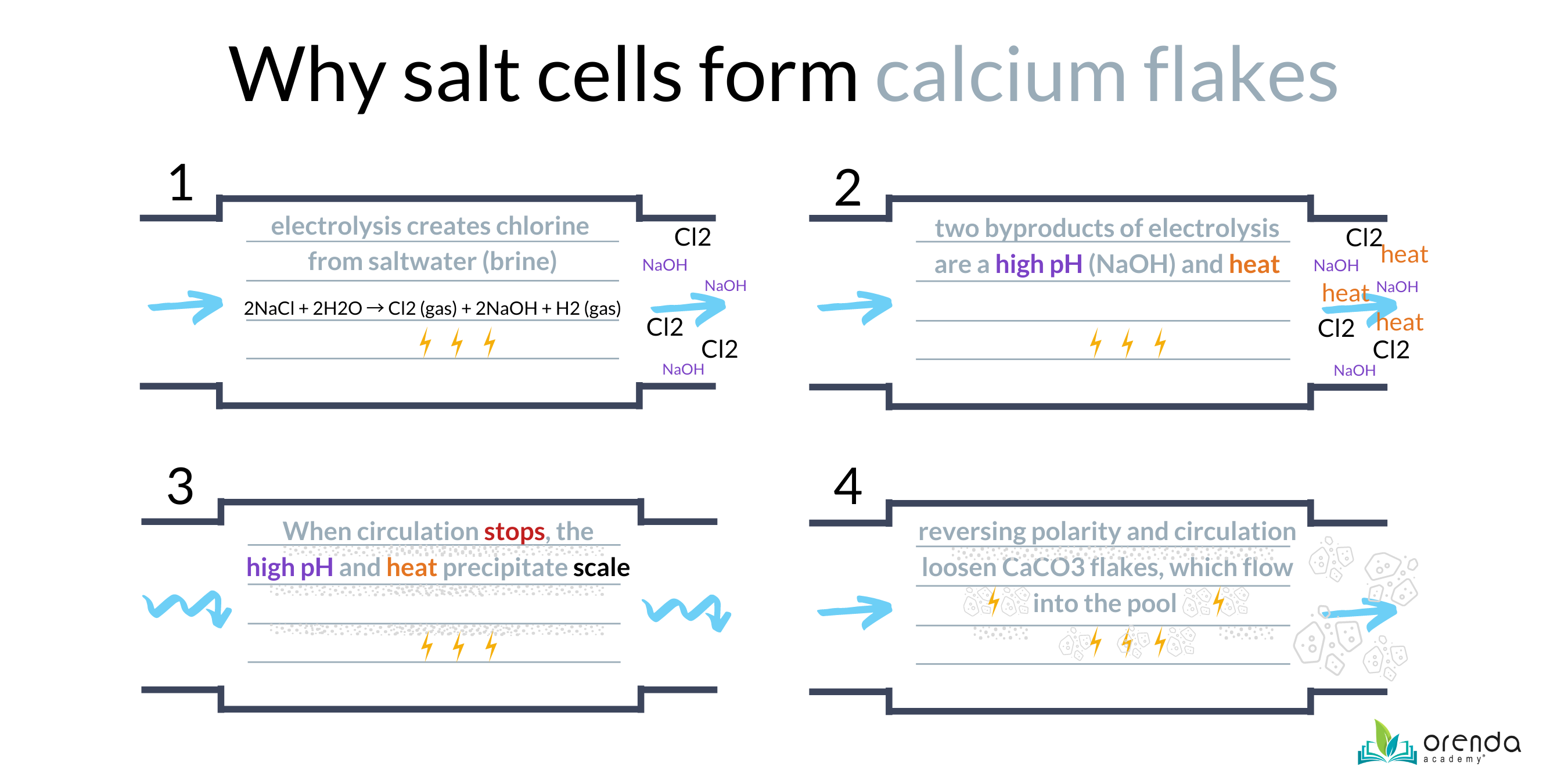 How to prevent scale in a salt chlorine generator

There are many ways, but let’s group them into two categories: chemistry and physics. From a chemistry perspective, if the pool itself is LSI balanced, you’re off to a good start. You can also chelate calcium in the water with SC-1000, which isolates calcium ions and inhibits scale. Chelation works by holding onto each ion, making it far more difficult for a carbonate ion to bind to the calcium and form calcium carbonate. Field experience shows that pools regularly treated with SC-1000 rarely have to clean their salt cells, if at all. 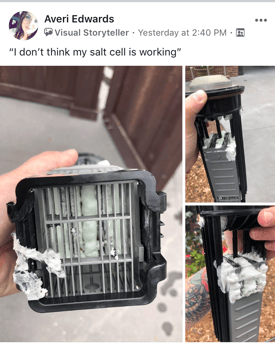 From a physics perspective, most scale forms when the water is not circulating. So the answer is simple: turn off the salt chlorine generator about 10 minutes before turning off the circulation pump. This extra circulation time allows the water to flush the sodium hydroxide out of the salt cell. Most people shut off the circulation system and the cell at the same time, and that leads to stagnant water sitting in a high pH salt generator chamber that is still warm.

That is worth repeating. Schedule your equipment to shut the salt chlorine generator off about 10 minutes prior to circulation shutting off. The extra circulation will help.

If carbonate scale has already formed within the salt cell, it tends to break off in chunks and flow into the pool, which is a condition that we in the pool business refer to as "snowflaking". Calcium flakes are an annoying problem, but it is just evidence of scale formation in the salt cells. 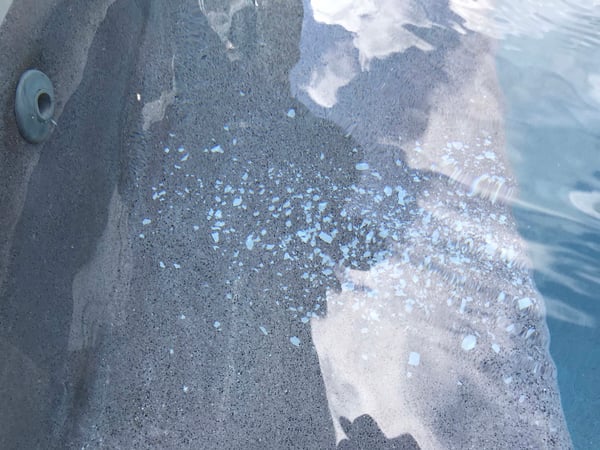 Sometimes, with high levels of phosphates in the water, an even more dense form of scale called calcium phosphate can form in salt chlorine generators. This is a very difficult problem to clean up, and while Orenda does not have a product that can break it down quickly or easily, some research suggests calcium phosphate forms when orthophosphates combine with calcium in a hot environment like a heater or salt generator. That being said, we have yet to find a salt system that actually has calcium phosphate scale on it. It takes a lot of phosphates, heat and calcium hardness for calcium phosphate to precipitate. All the flakes we have encountered have been calcium carbonate. 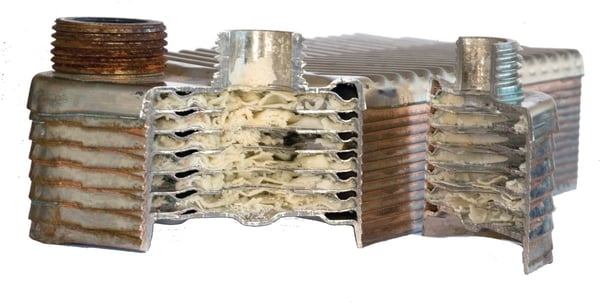 Heaters, or heat exchangers, transfer heat between coils and the water flowing through them. This transfer of heat means the water circulating through the heater is rapidly changing its LSI properties. That said, it’s usually not enough of a change all at once to precipitate calcium...it would take more time and a larger temperature rise. One pass of water through a heater may only elevate it a few degrees.

Here again, just like with chlorine generators, the problem is usually not when water is flowing. Scale precipitates when circulation is shut off and the heater is still warm. The easy remedy is the same as before: shut off the heater about 20-30 minutes prior to shutting off circulation. Allow the flowing water to cool down the heater more rapidly, and you can avoid scale formation in it.

Chemically speaking, just like with salt generators, balance the LSI, and if you want the insurance of a scale inhibitor, try treating the water with SC-1000 regularly.

We always say if you’re going to err on the LSI, err high. Scale is annoying and can cause problems, but it’s generally not damaging (unless it’s something severe like calcium phosphate, which is not entirely LSI driven). Scale is just an overabundance of calcium that needs to be deposited some place when water can no longer hold it. As mentioned earlier, carbonate scale will deposit in the hottest places first, and that’s why taking the time to cool the salt cell and/or heater down makes so much sense.  And it doesn’t cost anything.

We hope this article helps you prevent scale in pool heaters and salt cells. If you have more questions, leave a comment below or contact us directly. 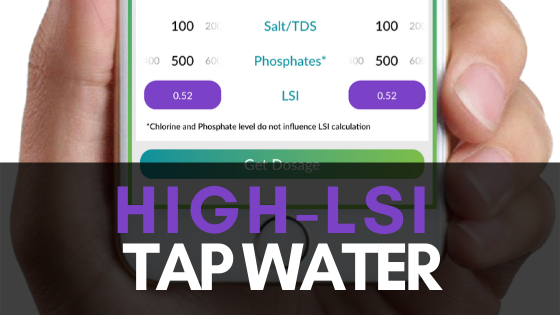 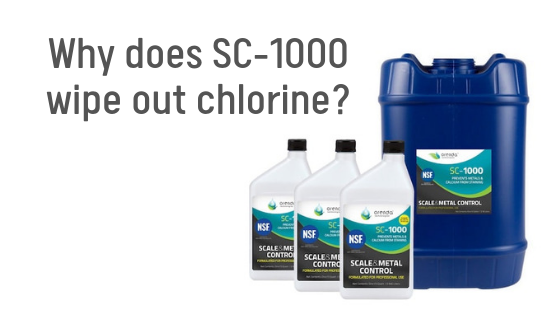