We have always been taught that pH controls the strength of chlorine. And that's true, except when cyanuric acid is in the water too. CYA changes the entire dynamic. Fair warning, this topic is controversial and contrarian to most textbooks and industry beliefs. But it is backed in science that we will cite in this article. Buckle up.

Conventional wisdom and pool chemistry textbooks teach us that lower pH means stronger chlorine. And it does, when CYA is not in the water. But thanks to some research by Dr. Stanley Pickens (Downloadable PDF) and the rest of the CMAHC ad-hoc committee for cyanuric acid, we now know that CYA takes over control of chlorine strength, rendering pH much less important for chlorine strength...though pH is still critically important for water balance on the LSI.

But it is important to note that this information has been known and published since 1974. It was just never widely adopted in the swimming pool industry. This should not be new information, but are writing this article today because when we speak about this, everyone is surprised and skeptical. To be fair, so were we.

Let's look at a chart many of us are familiar with, showing the strength of chlorine being determined by pH. The lower the pH, the higher the percentage of strong chlorine, Hypochlorous Acid (HOCl). The higher the pH, the lower that percentage, as HOCl is in equilibrium with the much weaker form of chlorine, the Hypochlorite Ion (OCl-). These charts were recreated and borrowed from Richard Falk's white paper about chlorine and CYA. The information originally comes from a study done in 1974 by J. O'Brien et.al., cited at the end of this article.1 You can view the full set of charts in our image gallery for this article.

The red line is strong HOCl, and the green line is weak OCl-. At about 7.5 pH, they are roughly 50-50., but at about 7.2 pH, its 70% strong chlorine. So yes, in this case, pH does control chlorine strength (% HOCl). No wonder industry textbooks tell us the desired pH range for swimming pools is 7.2-7.8. But that's for pools without CYA. Look at the title line, where it says in bold letters "...with no CYA". Here's the other side of the chart with just 30 ppm CYA in the water:

Where is the red line now?

There is a lot to unpack in this graph, but allow us to summarize for you: CYA has taken over pH's role of controlling the strength and speed of chlorine. If strength is determined by % HOCl, it plummets to below 3% at 7.5 pH. Compare that with 50% HOCl without stabilizer on the left chart. What happened here is simple: chlorine has bound to CYA, which creates isocyanurates (represented by the blue line, Cl-CYA on the chart). The yellow line is a combination of all the chlorine that is not bound to CYA. As you can see, the vast majority of chlorine is bound to CYA at 30 ppm.  This chart tells us two things:

Since swimming pool pH should [normally] range between 7.2 to 8.2, as you can see, there is almost no difference in HOCl percentage between 7.0 and 9.0 pH. That bears repeating.

There is virtually no difference in chlorine strength (% HOCl) based on pH when CYA is in the pool.

Look, we know this is contrary to decades of what we have all been taught in the industry, and it felt like a punch in the gut to us when we learned it. All those years of treating pools trying to keep pH where we wanted it to be (7.4-7.6), when in fact, the water itself did not want to be there at all (which we will elaborate on in a moment). The truth is, pH does not control chlorine strength in a stabilized pool; the free chlorine to cyanuric acid ratio does (FC:CYA).

Chasing pH is a losing strategy

We have come to learn that pH is a reactionary type of chemistry, which is our shorthand way of saying pH reacts to things that change in the water. For example, if too much acid is added to the water, the pH will not only drop down, but it will also likely cause surface damage. In the case of a cement-based finish (plaster/quartz/pebble/etc.), that etching will actually release a high pH calcium hydroxide, which will raise pH in the pool. This rebound of pH is all-too-common when overcorrecting with chemicals. That's just one of many reasons why it is so important to dose and measure chemicals properly.

The chart above shows the logarithmic pH scale, and common swimming pool chemicals. When you consider the extreme differences in these chemicals' pH, is it any wonder why pH bounces when you try to control it? Consider that Soda Ash is about 1200-times more basic than sodium bicarb. What do you think the difference between muriatic acid and liquid chlorine is?

It's hard to keep pH still because it is an equilibria that fluctuates rapidly when pH adjustment chemicals are added to the pool. We also know that pH is largely dictated by the amount of carbon dioxide (CO2) in the water. So when CO2 leaves the water, the pH goes up. Hence, why aeration, like vanishing edges and spa spillovers, tends to raise pH faster than in a normal swimming pool without splash features.

Here's a chart that was sent to us from Richard Falk showing the pH ceiling relative to the carbonate alkalinity: 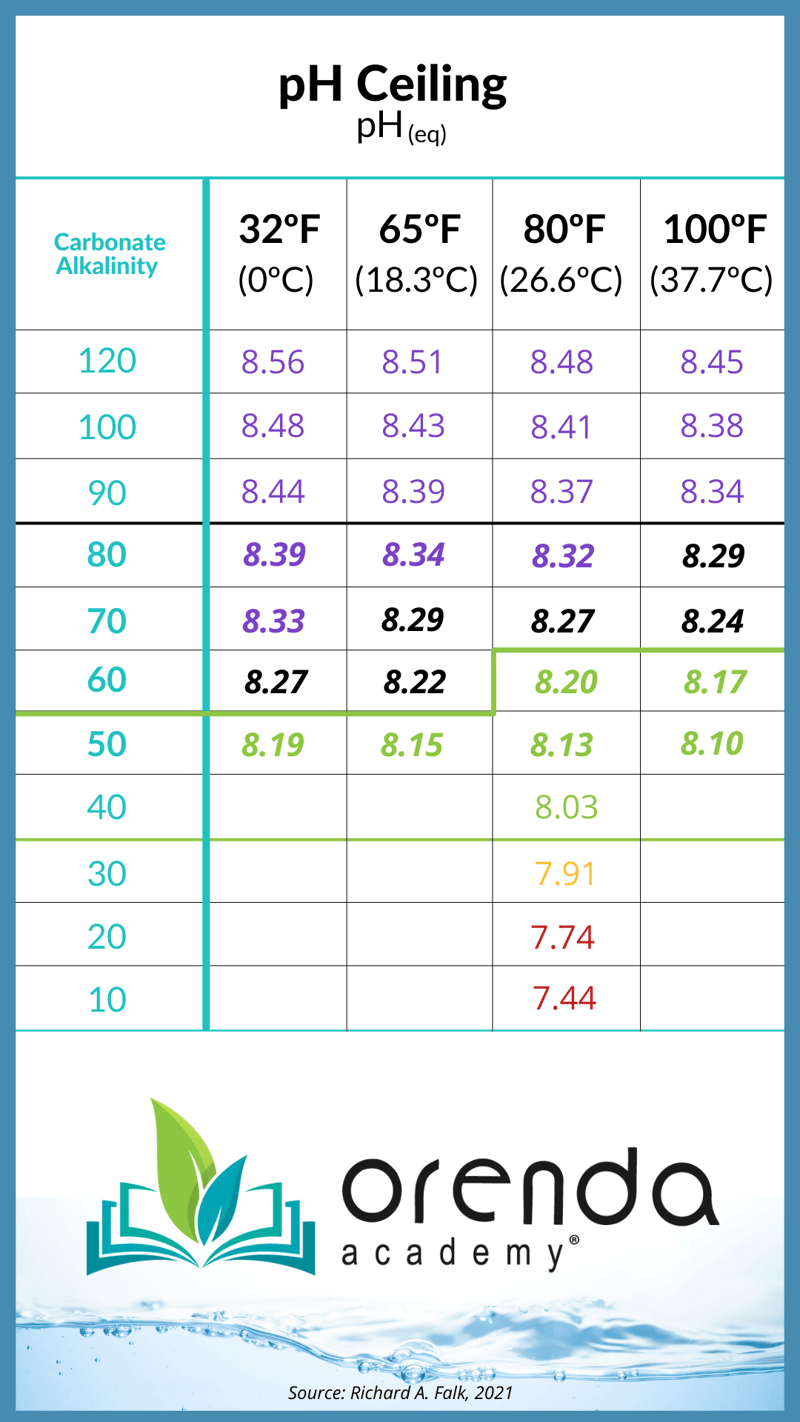 The bold numbers in the middle of the table show the most common carbonate alkalinity ranges in swimming pools. This is important because when pH gets over 8.2, it becomes much more difficult for calcium carbonate to stay in solution (the LSI is too high, usually). This is part of why we at Orenda recommend a higher level of calcium hardness and lower alkalinity, like 60-90 ppm, rather than up to 120 ppm.2 Note: do not let your alkalinity down that low if it makes your LSI go below -0.30. This is only to be done with enough calcium hardness to offset the lower alkalinity level.

The point is, if left alone, swimming pools naturally rise in pH. It's just physics, and it will continue to happen. You are not doing anything wrong if your pH keeps climbing on you. It is important to know that if the pH goes above its physical ceiling (~8.2), then it was forced unnaturally.

Here again, pH and CYA are intertwined in this relationship. Higher CYA means more cyanurate alkalinity, which must be subtracted from your total alkalinity to find carbonate alkalinity. It's complicated, we know, but don't worry. The Orenda App calculates all of this for you when you put in your CYA and Total Alkalinity numbers in the calculator.

The cyanurate correction is roughly one-third of your CYA (ppm) that is subtracted from your TA (ppm). So if you had 60 ppm CYA, take a third of it (20 ppm) and subtract that from your TA. A pool with 90 TA now has 70 carbonate alkalinity. According to Falk's chart above, that means the pH ceiling is 8.27.

Contain pH with an LSI floor and a physics ceiling

Rather than trying to control pH, try containing it. Containment is a more practical strategy, because if you set a foundation using the LSI, and you know the pH ceiling thanks to Henry's Law, now you have a window you can comfortably work with. More importantly, the pressure to maintain 7.4-7.6 pH is gone if you have cyanuric acid in your water, as illustrated above.

And before you say it, pH being about bather comfort because of the pH of our eyes is a myth. There is a study published on the official NIH website that found that eye irritation is usually from osmotic pressure due to the salinity difference between eyes and pool water. Slightly more alkaline water is unlikely to irritate our eyes. Eye irritation is caused more by disinfection byproducts (DBPs) like chloramines and trihalomethanes (THMs) like chloroform than pH.

Related: What is the ideal pH for swimming pools?

There have been numerous studies published online that show the impact that CYA has on chlorine. Specifically about how CYA drastically lowers killing speed (which increases Contact Time, or CT), and how it plummets HOCl concentrations (chlorine strength). We showed in the charts at the beginning of this article how HOCl concentrations drop to below 3% with just 30 ppm CYA. That's crazy! And any pool owner and operator using CYA needs to be aware of it.

Related: The Cyanuric Acid Limit for Public Pools (per the CDC)

But not all hope is lost. The good news is that stabilized chlorine (chlorine bound to CYA) can still disinfect. It just takes a little bit longer because chlorine has to break away from CYA before it can do its job. So stabilization is not the problem here; overstabilization is the problem that must be avoided. Overstabilization occurs when you have more CYA than you need, and it starts to really slow down chlorine. It doesn't necessarily make it any weaker (HOCl concentrations were already below 3% with just 30 ppm CYA), but slower chlorine means disinfection takes longer. When it comes to recreational water illnesses (RWI), the US Centers for Disease Control (CDC) does not mess around.

The CDC's Council for the Model Aquatic Health Code (CMAHC) assembled an ad-hoc committee on Cyanuric Acid, specifically to learn more about its impact. In 2017 they released this report at the World Aquatic Health Conference. Here is an important screenshot from their presentation:

Thanks to the CMAHC, the FC:CYA ratio is well on its way to being adopted as the new standard in place of blanket CYA ppm limits, or free chlorine minimums. Effective disinfection is the name of the game, after all. And if the FC:CYA ratio dictates chlorine's efficacy, then it needs to be front and center on our minds as we operate swimming pools. This is why the Model Aquatic Health Code (MAHC) recommends a maximum of just 15 ppm of CYA in a commercial swimming pool in the event of a fecal incident. It's simply impractical to try and kill crypto through hyperchlorination with elevated levels of CYA because the contact times are ridiculous. Check out the contact times in this screenshot from this CDC report:

Add CYA into that mix? It gets even harder to kill Crypto. Hence, the 15 ppm recommendation for CYA. Here is the PDF of the CDC's official Crypto incident response when CYA is in the pool.

Do not misunderstand what we are saying here. pH is still the most dominant of the six LSI factors, so it matters a lot for water balance. But we also know it is reactionary and should not be controlled. Instead, we recommend containing pH using its natural ceiling (based on physics and carbonate alkalinity), and a foundation of LSI balance as its floor. Let it naturally rise up during the week, because it's going to anyway. At least then the pH is predictable, and you're not wasting effort, time and money trying to fight it. It helps to have higher levels of calcium hardness and lower levels of alkalinity if drifting pH is an issue, as lower carbonate alkalinity can lower the natural ceiling for pH.

As a final note, this article is about outdoor chlorinated pools. pH still controls chlorine strength for pools without CYA, like indoor pools. Thanks for your time, and if you have more questions, please comment below.

2  The exception here is during the Orenda Startup™, where we want a positive LSI of +0.20 to +0.29 for the first three days. This generally takes a minimum of 100 ppm alkalinity. Once chlorine and other chemicals are introduced to the pool, the chemistry strategy needs to shift toward LSI balance closer to 0.00. 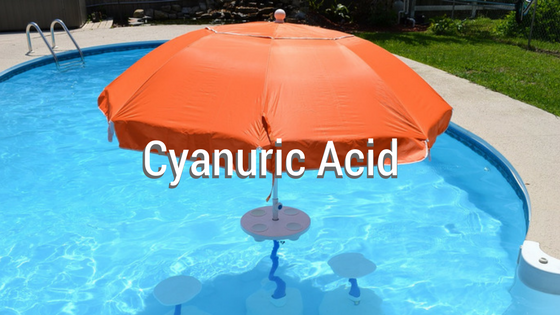