Algae (plural) are common in swimming pools that struggle with chlorine efficiency, sanitizer killing speed, and high phosphates. This article is an overview of what algae are, and how to kill and prevent algae from taking over your swimming pool.

Algae are a diverse group of aquatic organisms that are capable of producing oxygen through photosynthesis. While algae are not technically plants, animals or fungi, algae are generally referred to as plants because they contain chloroplasts and undergo photosynthesis. That said, algae lack the other typical features of plants: stems, leaves, and roots. They are usually single-celled organisms (called diatoms), though there are varieties like kelp and other seaweeds that are multi-celled.

Cyanobacteria are also considered algae; specifically blue-green algae, and black algae. These organisms are not plants, nor are they animals or fungi. They just have some similarities to other forms of algae. Namely, cyanobacteria are also aquatic and photosynthetic. Beyond that, they just kind of look and behave similarly to algae in water.

In microbiology, algae are considered beneficial to most ecosystems. They produce oxygen and can also help clean water. But at some point, when there is an overabundance of nutrients for algal growth, a problem called eutrophication can occur, which means the body of water can be overcome with algae. This overabundance of algae starves out other life eventually, including fish and other plants too. So algae is beneficial up to a certain point. 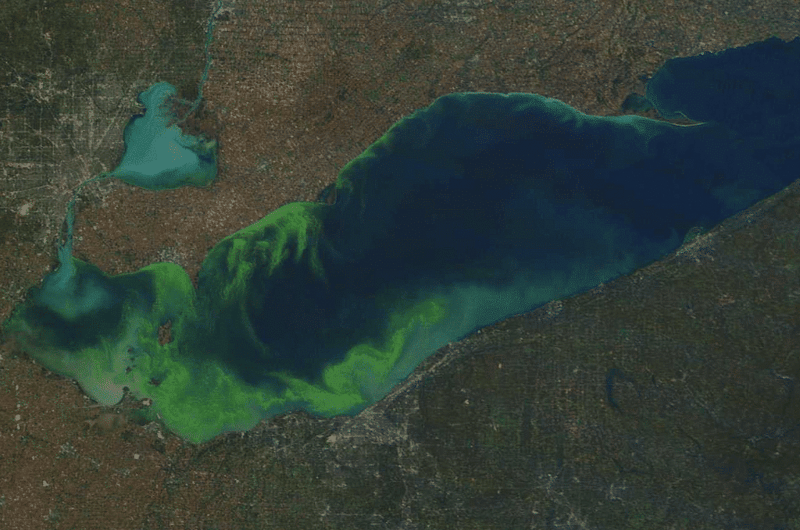 Large lakes can be taken over by algae when eutrophication occurs. The photo above is Lake Erie, circa 2016.

If your pool uses CO2 for pH control, that can actually feed algae.

Most algae grow by consuming nutrients, then duplicating cells. Algal reproduction can occur both sexually and asexually, depending on the species. Left unchecked, eventually, single-celled diatom algae will become a colony that replicates enough to be seen by the naked eye. And in a matter of days or even hours, that colony can become a bloom that is obvious for anyone to see. In natural waters, there are no sanitizers like chlorine to quell the growth rate, so reproduction rates depend on water temperature and available nutrients. 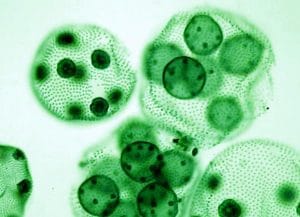 Algae normally spread to different bodies of water by the transfer of algae spores. Spores are singular reproductive cells that can germinate and reproduce when in the right environment. Algae spores are all over the place in nature and are often carried by the wind, and rain runoff. This makes preventing algae in swimming pools a constant battle.

Remember, algae are photosynthetic organisms, meaning they react in light to produce cellular energy. Specifically, the chlorophyll in algae absorbs light, allowing it to convert carbon dioxide and water into carbohydrates.

We only bring up this biology topic because algae consume carbon dioxide. There are two reasons why that matters. First and foremost, consuming carbon dioxide is kind of like off-gassing it out of the water. CO2 is reduced, and therefore the pH rises. Secondly, if your pool uses CO2 for pH reduction, that can actually feed algae.

Besides light and carbon dioxide, algae also need essential nutrients: phosphates, nitrates and a few others. Take any of these essentials away, and algae's growth and reproduction rate will slow.

Unlike natural ponds, lakes, and streams, swimming pools are treated to prevent microorganisms from growing and reproducing. Swimming pools and fountains have circulation and filtration systems and use a primary residual sanitizer (like chlorine) to prevent algae from growing. Chlorine's killing form in water, Hypochlorous Acid (HOCl), is an outstanding algaecide. So the types of algae that we find in swimming pools are particularly robust and resilient to chlorine.

Algae that survive in chlorinated swimming pools are tough and resilient. Only the toughest algae can survive in pools. According to the IPSSA Intermediate Training Manual:

Pool algae are survivors. Regular, garden variety algae (one of the more than 122,000 types) would not last more than a few seconds in a chlorinated pool. So the algae that do survive in a pool must be especially hardy." - Page 7

There are usually plenty of nutrients in a warm swimming pool for these tough forms of algae to grow rapidly. And as long as the chlorine level is depleted enough to not keep up with the growth rate of algae, an outbreak can occur. By the time you see algae, it has already reproduced many times from a single-cell organism to the point where you can see it with the naked eye. At that point, it can duplicate itself quickly and take over a pool. Hence a pool that flips green entirely, and is in need of a thorough green pool clean up procedure.

Related: Green Pool, yet No Phosphates

How to Kill Algae 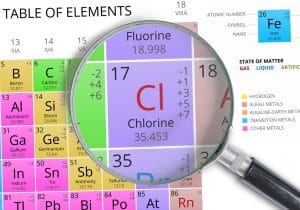 From everything we have read and learned, free chlorine (specifically HOCl) is the best algaecide. There are other sanitizers like bromine and algaecides on the market too. Note: Orenda does not make any algaecide or sanitizer, nor do we plan on it. Killing algae is the job of an EPA-Registered chemical, and we don't make one.

The chlorine level itself is not as important here as the Free Chlorine to Cyanuric Acid ratio (FC:CYA). This ratio determines the true capability of chlorine to kill. According to many sources, the ratio needed is a minimum of 7.5% of CYA. In other words, you need a minimum of 7.5% of your CYA ppm in free chlorine to prevent algae. That is, unless you keep phosphates to a minimum, in which case that ratio could be smaller–but we are still awaiting research to confirm that. We don't know exactly what that improved ratio could be until the research is completed, published and peer-reviewed.

Related: Five Things You Need to Know about CYA

How to Prevent Algae

Sanitization is a battle between [the growth or reproductive rate of the contaminant] vs. [the killing rate of the sanitizer] 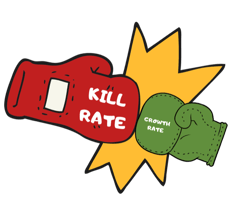 Preventing algae requires the killing rate of your sanitizer(s) always being greater than the reproductive rate of algae. For instance, if green algae reproduce every 3-6 hours, the killing rate of your chlorine must be faster than that. If not, we can get an outbreak. And as we have covered in other articles, your chlorine's killing power is not just the free chlorine level. It's more about your free chlorine to cyanuric acid ratio (FC:CYA). This is because CYA can dramatically slow down chlorine's kill times.

Preventing algae doesn't require using algaecides regularly. In fact, it doesn't need algaecides at all...just a good FC:CYA ratio. So rather than dumping chemicals into a pool, we find it far more efficient to address the source of the issue, rather than fighting the consequences. Field experience tells us a more practical and proactive way to prevent algae is to both optimize chlorine's killing power AND minimize the growth rate.

There are ways to optimize chlorine efficiency. Reducing non-living organics, for example, reduces the oxidant demand on chlorine. Supplementing disinfection by using a UV or Ozone system also supplements chlorine, which can help free it up to sanitize. Strategies like these just assist chlorine in other areas so it has more power to kill algae.

While removing nutrients like phosphates can minimize the growth rate, it will NOT kill existing algae. High phosphates appear to raise the chlorine demand, but in reality they're just allowing generations of algae to reproduce rapidly, which uses up chlorine. The most we can hope for is to slow down the reproduction rate enough that the sanitizer can stay ahead. And if we can accomplish that, algae outbreaks should not occur. We discuss more in this video:

Water chemistry alone is not always enough to prevent algae growth. Pools need to be thoroughly brushed weekly (or more) to knock algae off walls and out of corners and crevices. Brushing helps remove–or at least loosen–biofilms that could be protecting the algae from chlorine. In that same vein, vacuuming is also important to remove debris and non-living contaminants like soil or dead leaves.

Filtration and circulation round out the big three elements of water quality (the third being water chemistry). If there are dead spots in the pool from poor circulation, algae tends to grow better in those spots. The filter itself is great for trapping algae too, which will be killed as chlorinated water circulates through the filter. Without good filtration and circulation, brushing and vacuuming, even a perfectly balanced and sanitized pool could struggle with algae problems over time.

Algae are photosynthetic organisms that are not really a plant, animal or bacteria...they're kind of their own category. Within the group include green algae, which are most like plants (minus roots, leaves and branches), yellow mustard algae (also like plants), and blue-green or black algae, which are a cyanobacteria. The types of algae that can survive in a chlorinated swimming pool are especially robust; they can reproduce every few hours under the right conditions. It takes a sanitizer like chlorine or an EPA-Registered algaecide to kill algae. To prevent it, just ensure two things:

We cannot manage all essential micronutrients in pools, but as long as we manage one of the major ones, phosphates, algae's growth rate can be kept to a rate that chlorine SHOULD be able to stay ahead of. We hope this article helps.