In the event of an Accidental Fecal Release (AFR), the CDC has published a recommended limit to Cyanuric Acid (CYA) at 15ppm for commercial swimming pools. The vast majority of outdoor pools in America have far more than 15 ppm of CYA already, so what can be done? 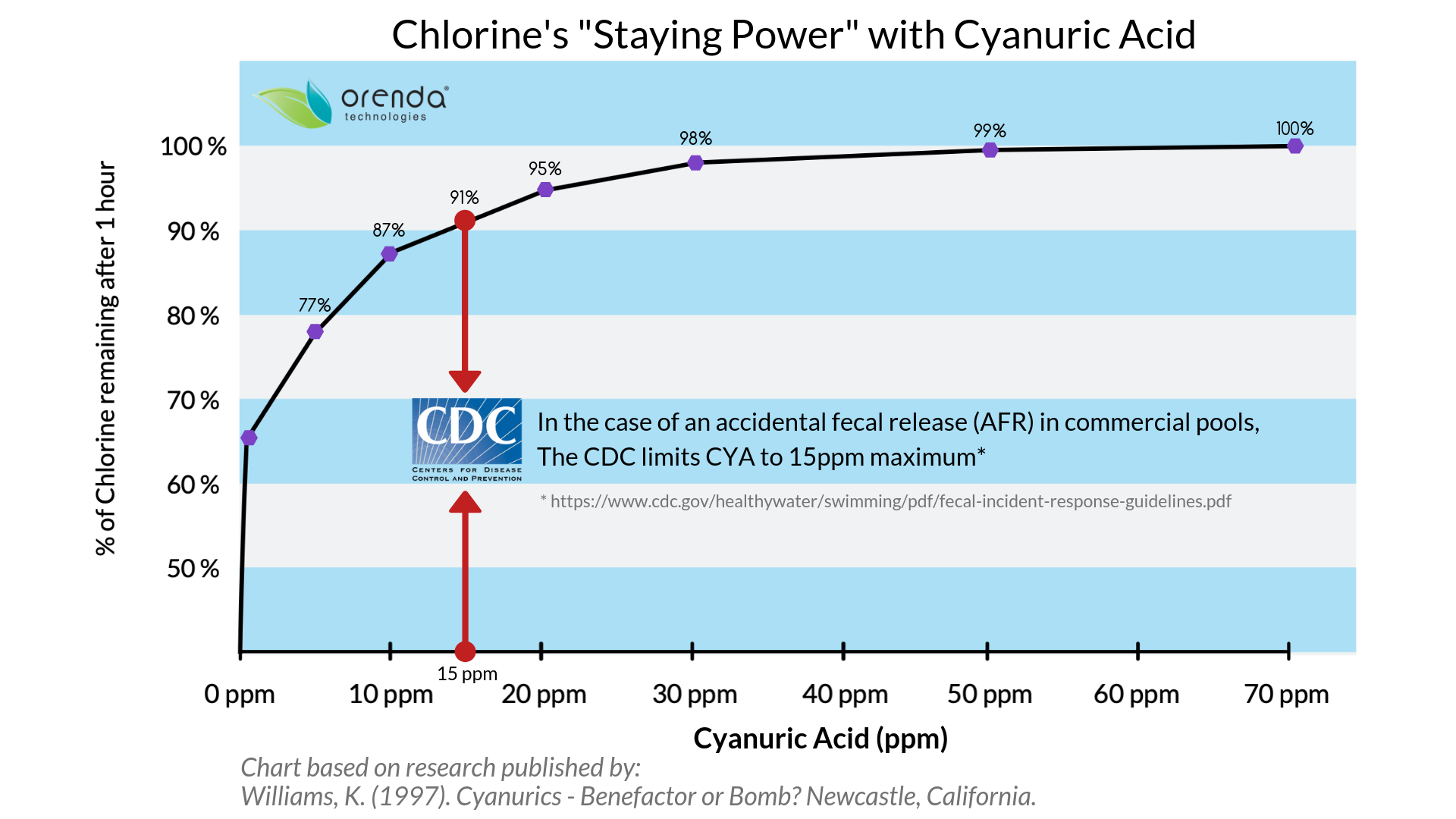 CYA impacts pool chemistry in several important ways, and we continue to learn more about it. Because of CYA's importance, the Council for the Model Aquatic Health Code (CMAHC) formed an ad-hoc committee for cyanuric acid, led by Richard A. Falk, a source we often cite in our articles. When speaking with Richard on the phone, he told us:

"The purpose of the suggested 15 ppm maximum for commercial pools was simply a practical matter. The contact times (CT) to kill RWI's like cryptosporidium become too high to be reasonably accomplished. So high that they were not worth measuring after a certain point, so we set a cap at 15 ppm for practical reasons, because the CT required was virtually impossible." - Richard Falk

So the CMAHC made the recommendation, and the CDC's MAHC itself published that CYA levels can no longer exceed 15ppm. It's a pretty big deal to have the CDC weigh in on this topic. But it's not like there's any shortage of research showing that higher CYA increases bather risk of recreational water illnesses (RWI) because of slowed disinfection.

Due to CYA's control over chlorine strength, it becomes virtually impossible to kill crypto in a reasonable amount of time. Since that time is significantly increased with CYA, the most practical way to do this is to reduce CYA by draining water and diluting it down.

The chemistry of cyanuric acid (CYA)

The cyanuric acid molecule is a hexagon with alternating Nitrogen and Carbon atoms. It allows for three molecules of chlorine to attach to the nitrogen atoms, forming a nitrogen-chlorine bond (N-Cl). Without getting too scientific, just know that this N-Cl bond is weak, which allows for chlorine to let go of CYA when it has something to oxidize or kill. When attached to CYA, however, chlorine is protected from sunlight. Sunlight can be wipe out chlorine by 75-90% in a matter of two hours. The half-life of chlorine—when exposed to direct sunlight—is about 45 minutes. That’s astounding.

So a stabilizer is helpful, otherwise you will be using (and losing) chlorine all day, every day.

Chlorines like dichlor and trichlor have CYA in their formulas. In fact, Trichlor is about 55% CYA by weight. Because of this, they are known as stabilized chlorine, and should be used only in outdoor pools, because CYA's only benefit is to protect chlorine from the sun. Indoor pools do not have that issue. 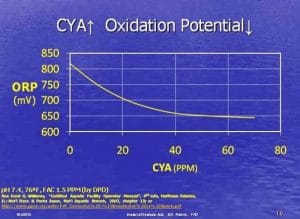 Obviously, the protection from sunlight that CYA provides is a huge benefit to chlorine. But like anything great, there is a limit. At some point CYA gets in the way of chlorine, and reduces its strength (% HOCl) and slows its killing speed (mV ORP). We call this overstabilization. Stabilization itself is not the problem. Overstabilization is.

While the CDC's recommended limit is 15 ppm for a commercial pool, the ideal sunlight protection is around 30 ppm. We at Orenda recommend no more than 50 ppm CYA, because as you can see from the chart at the beginning of this article, the vast majority of chlorine is already protected at 30 ppm. Given that pH no longer controls the strength of chlorine in a pool with stabilizer present, managing the free chlorine to cyanuric acid ratio (FC:CYA) becomes paramount. 50 ppm is manageable, but when you get higher than 50, it becomes more challenging to maintain effective sanitization. 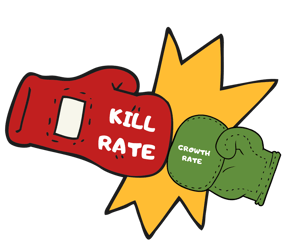 Sanitization is basically a race between the killing speed of chlorine and the growth/reproduction rate of a contaminant. If the growth rate exceeds the kill rate of the sanitizer, you will have an outbreak. This is why high levels of CYA is directly correlated to algae growth.

The first question we ask when someone calls us about a recurring algae problem is "what is your cyanuric acid level?" Often times, it's out of control because of stabilized chlorine, and there's just not enough free chlorine to effectively sanitize and disinfect the water. So yes, overstabilization is a problem because it lowers ORP and weakens chlorine.

A new way of thinking

In our opinion at Orenda, the cyanuric acid conversation offers our industry a new way of thinking. It also offers pool owners who have been struggling with algae and other problems another reason to switch to a non-stabilized chlorine. We are not saying stabilized chlorines are obsolete, but we question whether or not they should be used as a primary chlorine all season long. Perhaps a better approach is to start the season with trichlor until the CYA gets to the ideal level (below 50 ppm at the most), then switch to something else, like cal hypo or liquid chlorine.

It's a paradigm shift, we know. But thanks to customer demand, chlorine feeders and cal hypo systems are becoming more affordable and widely available.

All information provided is intended for educational purposes and is not implied to replace consultation with a qualified pool professional. It is recommended that all information from this or any other source is to be performed assuming individuals performing these functions will consult local state and federal requirements before you act upon it in any way. While this site attempts to provide information that may be relevant to you, no guarantees are made that some relevant information will not be missed. We recommend you consult a local pool professional before acting.

Get our mobile App