Cicadas are coming. And while cicadas are not into swimming, their sheer numbers will lead to many landing (and dying) in pools. Let's discuss how to handle these giant insects.

Every 17 years, a massive swarm of cicadas (called Brood X) emerge from the ground to climb trees, mate, and lay eggs. The species is different from most insects in that their maturation cycle takes so long. Let's go back 17 years to 2004 and remember what it was like. If you are in the eastern United States, you may remember it too. This summer's cicada's parents were buzzing at ear-splitting volumes for weeks. They mated, then each female sliced into tree branches to lay hundreds of eggs. Those eggs hatched into Nymphs (estimated 1.4 million per acre). The nymphs dropped to the ground and burrowed deep underground for 17 years. This summer, they make their return.

This every-seventeen-year phenomenon dates back to before Europeans arrived on this continent. Cicadas have a unique survival mechanism called "predator satiation." In other words, emerge in such numbers that predators cannot possibly eat them all. Almost every bird gorges on cicadas–as do cats, raccoons, opossums, snakes, frogs, and turtles. And they hardly make a dent in the cicada's numbers.

Cicadas live only 2-6 weeks after emerging

After 17 years of darkness and slow development, cicadas emerge to do their thing. And within 2-6 weeks of emerging, they die. It's sad in a way, but it's their natural order. For us, this means cicada carcasses. Lots and lots of cicada carcasses. 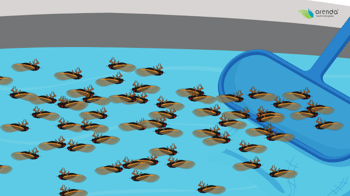 We must remember where cicadas have been in their short time above the ground. They have been in the trees (mostly). When females cut open small branches to lay their eggs, the sap from the trees gets on the cicada. And while this is a minuscule amount of tree sap, keep in mind we're talking about over a million cicadas per acre. If you have hundreds of cicadas dropping into your pool, you can bet the non-living organic load will rise. Chlorine demand will temporarily rise too (at least until you remove them from the water).

And according to many sources online, decomposing cicadas are rich in Nitrogen. As we know from previous blogs, you don't want nitrogen compounds in your water, because that also increases chlorine demand (combined chlorine). Breakpoint chlorination, anyone?

The best thing to do is to remove the dead cicadas from the pool as often as you can. If your chlorine levels drop, add more chlorine. To be proactive, you can use enzymes in your pool to manage whatever non-living organics cicadas introduce.

In 2004, the cicadas in Northern Virginia/Washington D.C. were so dense that drivers needed windshield wipers. Within a few weeks, they were all dead and the air was eerily quiet. People used leaf blowers to clear roads and sidewalks. It's safe to assume the same will occur this year. In fact, as of today, their emergence has already begun.