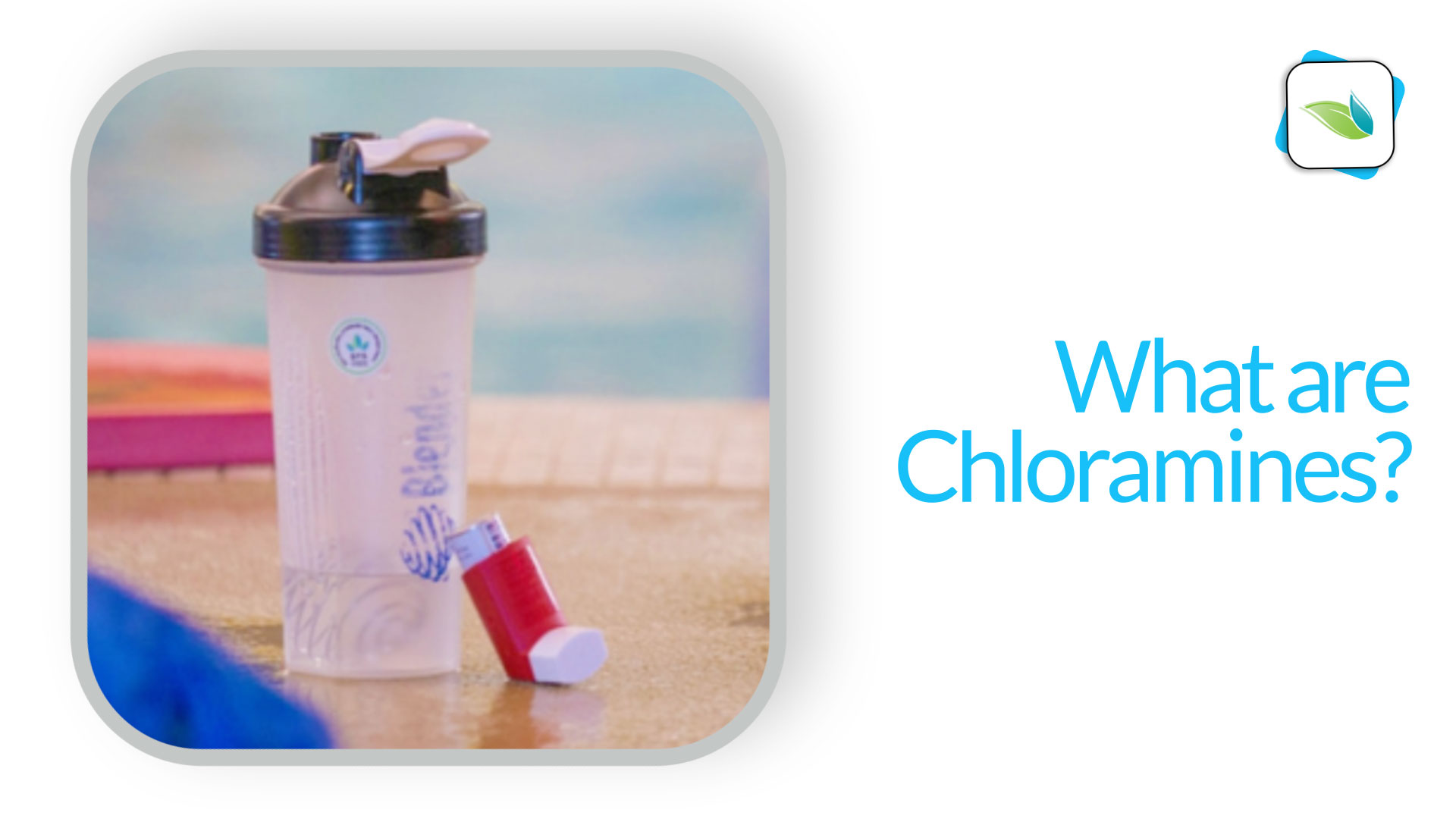 Chloramines are chemical byproducts of chlorine oxidizing nitrogen-based compounds in water. They are referred to as disinfectant byproducts (DBPs). Normally, it is the incomplete oxidation of carbon, ammonia and nitrogen-based organic waste that creates the long list of DBPs, whereas chloramines themselves follow a specific pattern.

First and foremost, most people refer to all DBPs as "chloramines", but that is an oversimplification. There are only three types of chloramines: monochloramine, dichloramine and trichloramine. Every other DBP (such as chloroform, cyanogen chloride, etc.) is formed by its own specific series of chemical reactions. For the purposes of this article, we will just focus on actual chloramines themselves. If you would like to know how the other DBPs are formed, we encourage you to do further research.

How Chloramines are formed

Let's start with Ammonia, which is a molecule with one Nitrogen attached to three Hydrogens (NH3). Since Nitrogen has three (3) electrons, it is fully occupied by single-electron Hydrogens. As chlorine does its job, rather than simply oxidizing and destroying Nitrogen, it combines with it in a series of chemical reactions. These chemical reactions are why we have the term "combined chlorine". It is not uncommon for pool people to use the terms chloramines and combined chlorine interchangeably.

As chlorine's strong, killing form of Hypochlorous acid (HOCl) is introduced to the water, it oxidizes and kills contaminants. When HOCl comes upon a Nitrogen, however, Nitrogen is not easily oxidized.  It takes a 5:1 weight ratio (1:1 molar ratio) of HOCl:NH3 for one Hydrogen to dissociate from Ammonia and be replaced by a Chloride (Cl). In other words, Monochloramine is formed when one of the three Hydrogens is replaced by a Chloride (Cl) from HOCl. The reaction occurs quickly, and looks like this:

More HOCl continues to oxidize, and eventually an additional 5:1 weight ratio threshold is met, and another Hydrogen dissociates from the Nitrogen. It too is replaced by a Chloride (Cl) ion, and now Dichloramine has been formed. If you are keeping count, this is now a 10:1 weight ratio of HOCl to what was once Ammonia. The reaction looks like this:

You can probably guess the pattern by now. Yes, eventually another 5:1 weight ratio of HOCl to [this evolving Nitrogen compound] occurs, putting the tally up to a total weight ratio of 15:1 (3:1 molar ratio) HOCl to what was once Ammonia. When the final Hydrogen dissociates away from Nitrogen and is replaced by the third (and final) Chloride ion, Trichloramine is formed. Actually, the proper chemical name for this compound is Nitrogen Trichloride. It is referred to both ways, depending on which sources you read.

Trichloramines are unlike their predecessors, because trichloramine goes airborne. Mono- and Dichloramines remain in the water, but not trichloramines. This off-gassing is an inevitable part of this process, and is the primary culprit behind indoor air quality problems.

Let's pause and think about this for a moment. To oxidize Ammonia out of the water, it takes a 15:1 weight ratio (3:1 molar ratio) of HOCl to Ammonia. And that's just HOCl, not all of your chlorine. At a 7.5 pH, that's just 50% of your Free Available Chlorine (FAC), assuming you have no Cyanuric Acid (CYA) involved. This process takes up a ton of chlorine! We wish we had an enzyme or some other product that could assist in the breakdown of Ammonia and other Nitrogen compounds like urea, but we do not. So we must rely on chlorine to do the heavy lifting here. The final reaction to form Trichloramine looks like this:

So chlorine combines with Ammonia in three successive stages: mono-chloramine (NH2Cl), di-chloramine (NHCl2), and tri-chloramine (NCl3). Believe it or not, chloramines actually have some disinfection capability, which is why they are also sometimes used as disinfectants in municipal water. Their health impact continues to be debated. That said, as more and more chlorine is added to the water, it begins to attack chloramines as though they are a part of the oxidant demand that must be destroyed in order to reach breakpoint chlorination. On the chart below, the destruction of chloramines is from point B to C. 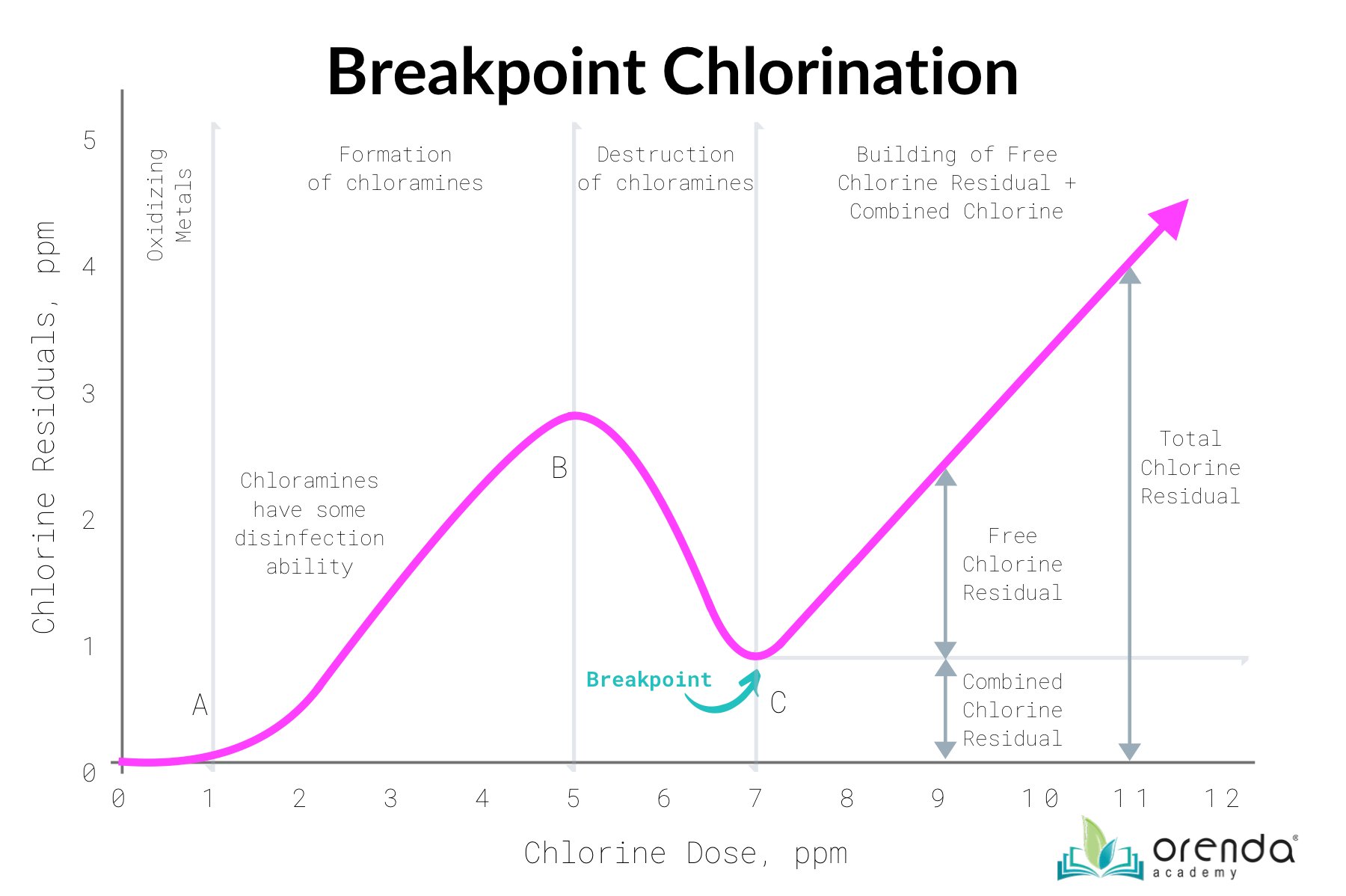 At Orenda, we recognize the impact chloramines have on our health and comfort. We also believe there is no such thing as a single “cure” for all chloramine problems in pools. There are some chemicals, systems and coordinated strategies that all address chloramines in different ways, and we believe it takes some of each to take control of a chloramine problem. This article gives our opinion on the strengths and weaknesses of chloramine solutions on the market today. That being said, our opinions are based on first-hand evidence from pools currently using these solutions.

We do not know of any chemical that directly breaks down or reduces Nitrogen compounds like Ammonia or Urea. Orenda enzymes break down and remove Carbon-based substances from water, but not Nitrogen. At least for now, the best chemical strategy to remove these compounds is with chlorine. That is, unless you have Nitrates, which can also be removed by partially draining or filtering the pool with reverse osmosis.

Traditionally, pool operators have been taught to measure their combined chlorine (total chlorine minus free chlorine). When the combined chlorine exceeds 0.2ppm, it’s time to shock the pool. Some use more free chlorine, like calcium hypochlorite (sometimes 10x the normal amount), and others use non-chlorine shock products like potassium monopersulfate (even though it’s not a sanitizer, just an oxidizer). But potassium monopersulfate does not remove chloramines. It only helps prevent future chloramines by reducing organics.

But there are a few issues with this strategy. First and foremost, it takes a lot of chemicals—and they are not cheap—to shock a pool, and even more chemicals to restore balance afterward. For example, using a non-chlorine shock like potassium monopersulfate can reduce the pH in the pool, as well as leaving behind byproducts. Restoring balance takes more chemicals. Just look at all the problems that come with trying to beat chloramines with more chemicals. Second, it’s unclear if shocking actually solves the problem.

Shocking a pool, in our opinion, is to be used for disinfection purposes only--like a fecal incident or disease outbreak. Shocking for oxidation reasons should be a sign that normal chlorination is unable to handle your bather load.

Enzymes break down and digest non-living organic waste to help chlorine be more efficient. With the exception of fecal incidents at the pool, Orenda enzymes can drastically reduce the need to shock, if not eliminate it. Like anything, of course, there are always exceptions that depend on other factors. Generally speaking, enzymes do the heavy lifting for chlorine against carbon-based bather waste, so there is more chlorine available to address everything else.

Enzymes do not disinfect anything, nor directly attack chloramines. Even in an enzyme-treated pool, some chloramines will still form and off-gas into the air, but the amount of them can be reduced. We have personal experience of training in indoor swimming pools where the air quality was dramatically improved with the use of Orenda enzymes.

For waterborne mono-, di- and still-aqueous trichloramines, medium pressure Ultra-Violet (UV) is a very effective destroyer. Even low pressure UV can destroy monochloramine (but lacks the wavelengths to destroy dichloramine or trichloramine). The downside of UV is that it is located in the pump room, and has to wait for water to circulate through it. It can only kill what it sees, and if your pool has poor circulation or a high bather load (or both), UV may not be able to keep up. This is what we refer to as a point-of-contact system. That said, it's incredibly effective at what it does.

An alternative to UV is Ozone (O3), which actually flows into circulation with a short lifetime, and primarily disinfects and oxidizes in a contact chamber in the pump room. Here again, ozone is a point-of-contact system, and is at the mercy of the pool's circulation. When set up and operated properly, ozone is an incredible oxidizer that can destroy not only chloramines, but the nitrogen compounds that lead their creation, like ammonia itself, and urea. In fact, ozone is one of the most effective natural oxidizers and disinfectants on the planet.

Recently, the concept of introducing purified, concentrated Oxygen (O2) into micro-bubbles has come to market. The process is referred to as Hyper-Dissolved Oxygen (HDO). While pure oxygen is a relatively weak oxidizer compared to HOCl and Ozone, HDO puts oxygen into solution and sends it out to the pool. The bubbles are literally so small they can stay in solution for days. This allows HDO to create a residual of high levels of oxygen, which supplements chlorine and enzymes. We also have personal experience swimming in a pool with HDO, and the impact on indoor air quality and water quality was obvious. The byproduct is pure oxygen that eventually off-gasses from the water, which provides oxygen to the breathing zone of swimmers.

The most noxious chloramines of all are trichloramines. These are the ones that go airborne and cause all sorts of problems for people and the facility itself.
Related: Natatorium Air Quality Resources
Airborne chloramines are very acidic, and when combined with moisture already in the air—from pool evaporation—they condense on metals, causing rampant rust, corrosion and overall destruction. The problems really compound in indoor pools, where HVAC systems either recirculate chloramines, or they get trapped in the bottom of the natatorium—in the swimmer’s breathing zone—unable to escape.

Trichloramines and other DBPs destroy HVAC systems, metal structures (like a roof or structural steel), and metal pool equipment, such as starting blocks, lights or timing equipment. Pool chemicals and systems to treat waterborne chloramines are useless against airborne tri-chloramines (obviously). To address airborne chloramines, there is only one system that we have seen to be truly effective: The Evacuator, by Paddock. It’s a ventilation system that targets and exhausts the harmful air in a pool, and prevents HVAC systems from recirculating it. We have seen several indoor pools with Evacuator systems, and they are very effective.

Like every other ‘solution’ to chloramines, there are weaknesses of the Evacuator system too. First, unless its design was coordinated before the pool was built—Evacuator built into the pool gutter or deck drain, matching the HVAC system design—its effectiveness is at the mercy of the shape and design of the room. Retrofit Evacuators can still be a huge improvement to air quality, but may not be able to fully solve the problem. Second, putting one in an existing pool is a significant capital investment. Third, the Paddock Evacuator will not fit in every facility; many require a redesign of their current duct and HVAC system.

As we said earlier, we at Orenda do not believe that any one “solution” can completely eliminate chloramine problems. Be wary of any brand or product that claims otherwise, because this problem is not black and white. There are a multitude of factors to address. For natatoriums, the healthiest pool environment usually needs the following:

Chloramines are an inevitable part of pool chemistry, but they can be addressed, and the problems they cause can be prevented.