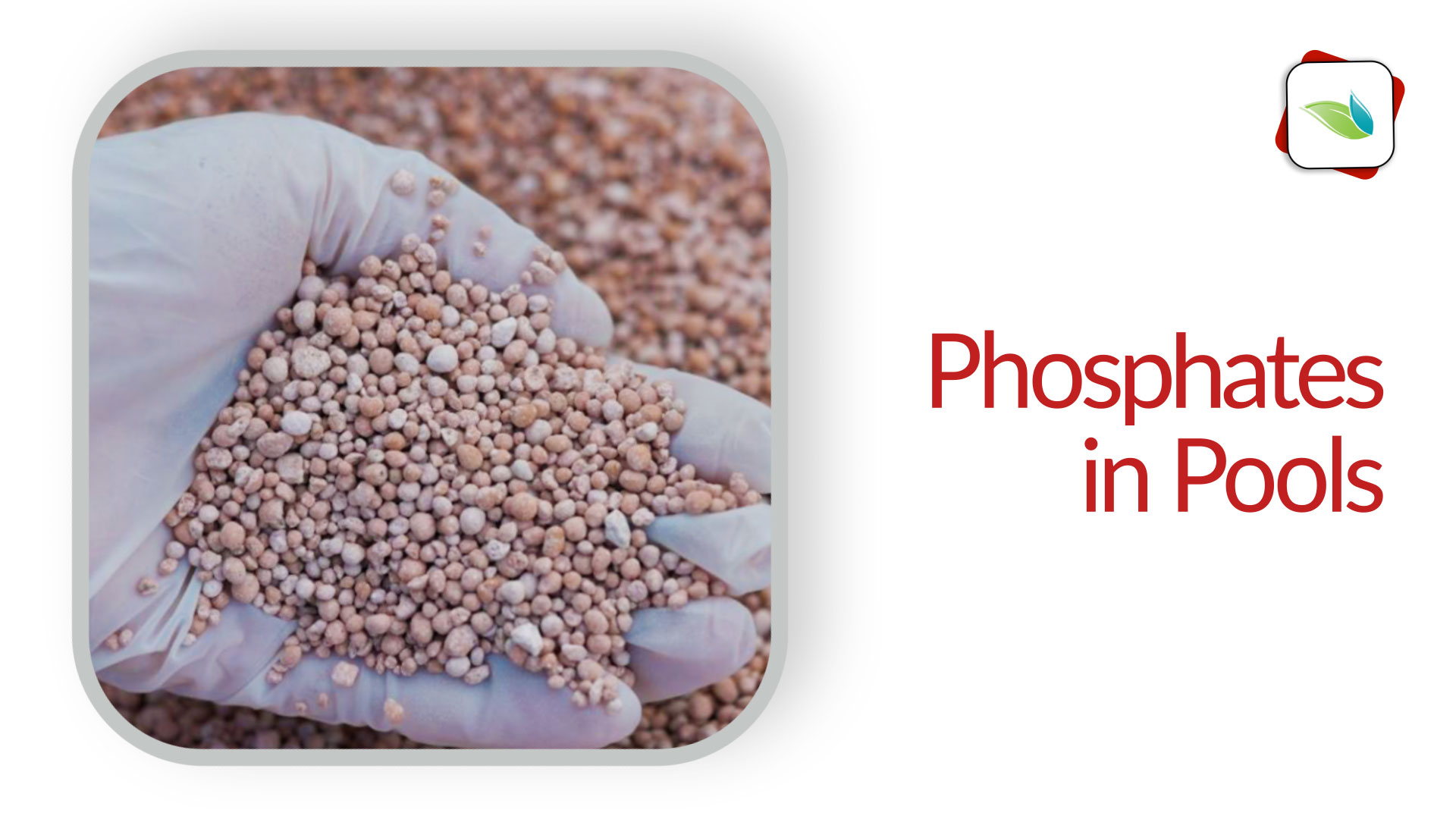 Phosphates in pool water have become a common problem, yet the topic is largely misunderstood or misrepresented. Do you know what phosphates are, where they come from, and why they cause issues for pool chemistry? If not, this article is for you.

Phosphates are compounds made of phosphorus and oxygen that are commonly found in water. The most common base phosphate unit is PO4, commonly known as orthophosphate. In simplified terms, phosphates can be derived as esters or salts of phosphoric acid.

In swimming pools, we care about phosphates because they are food for reproducing contaminants like algae. Phosphates indirectly increase chlorine demand and interfere with chlorine efficiency. Because of this, removing phosphates to keep their levels below 500 ppb (µg/L) is our third pillar of proactive pool care. 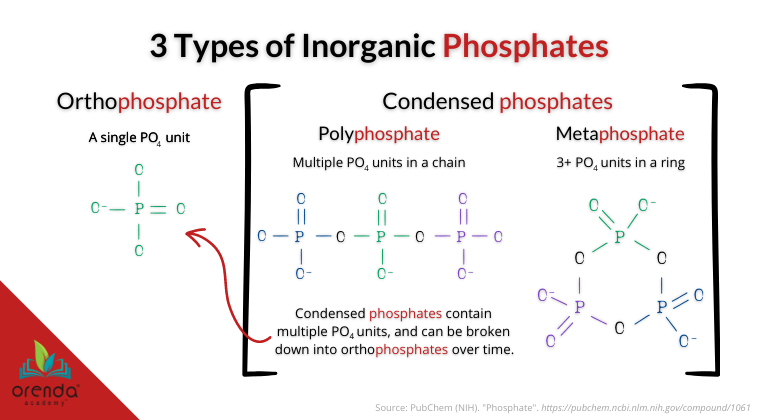 Most phosphate test kits in the swimming pool industry test only for orthophosphates, and not the others. We have found such tests to be inaccurate–or more specifically, incomplete–unless the test is reading total phosphate.

We have a more reliable way of knowing if phosphates are present in the water. Even if there are phosphates in the water that the test kit cannot pick up, PR-10,000 will find them. Take a capful of PR-10,000, drop it in one place, and count to 30 seconds. If that clouds up larger than a basketball, it's probably worth treating for phosphates.

Is it accurate? Not at all. But is it reliable? Absolutely.

We, and many of our customers, have tested zero phosphates, yet when adding PR-10,000, the water clouds up in seconds. This proves phosphates were indeed in the water, but the test kit failed to detect them. 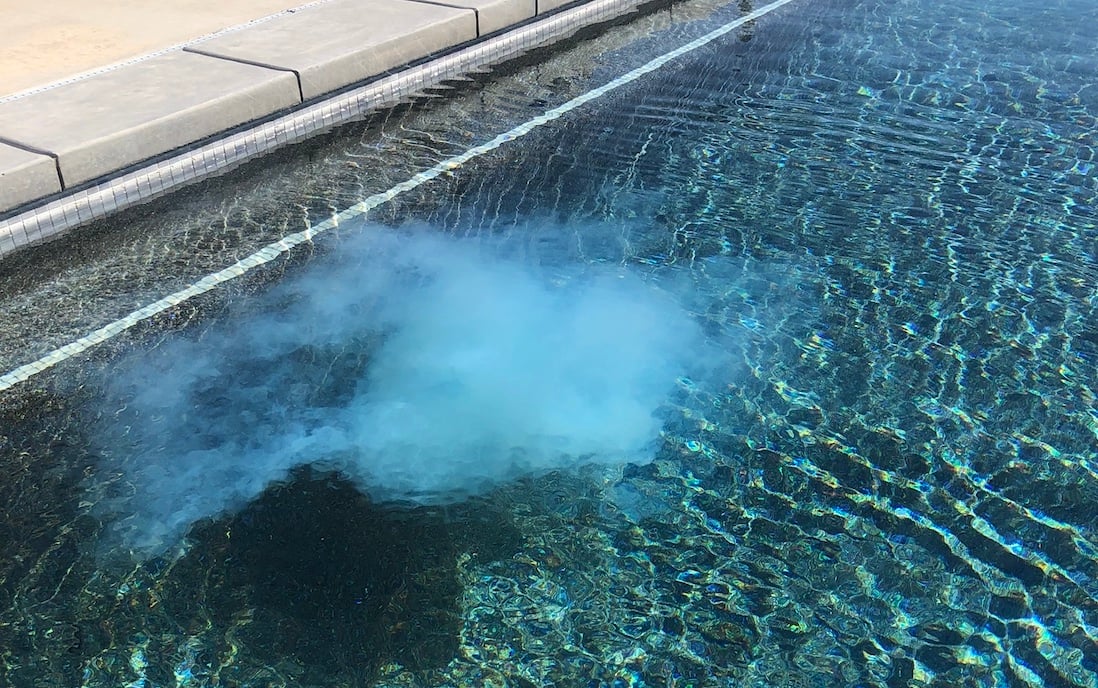 Where do phosphates come from?

Phosphates will inevitably get in the pool at some point. If not from the chemicals you use, then from the environment around the pool, or the bathers in it. And if not from either of those, then phosphates are still likely to get in from the tap water.

Scale and stain inhibitor products are usually phosphate-based. They are some form of a condensed phosphate compound, like a phosphonic or phosphoric acid blend. To avoid being too specific, we'll just say that sequestering agents, in general, are phosphate-based. Not all, but most.

This includes pressed cal hypo products because those types of chlorines use binding agents and a phosphate-based scale inhibitor in them. Sure, its not a lot of phosphates by percentage of chlorine. But it adds up. And the faster you use cal hypo (higher chlorine demand), the faster your phosphate levels climb too.

We'd like to note that our scale and stain inhibitor product, SC-1000, is not a sequestering agent, and not phosphate-based. SC-1000 contains zero phosphates and is compatible with PR-10,000 and all other Orenda products.

Nature and other contaminants

It should be noted that this paragraph has been revised almost a dozen times, because we find ourselves getting into specifics and losing the point. So in an effort to simplify, think of contaminants as anything that is introduced to the water unintentionally. Leaves, grass clippings, soils, pollen, and other natural organic materials; fertilizers, pesticides and other man-made products that contain phosphates; wildfire soot/ash if you're in a region close enough to smell the smoke from wildfires; and sometimes bathers themselves, depending on what's on their bodies. 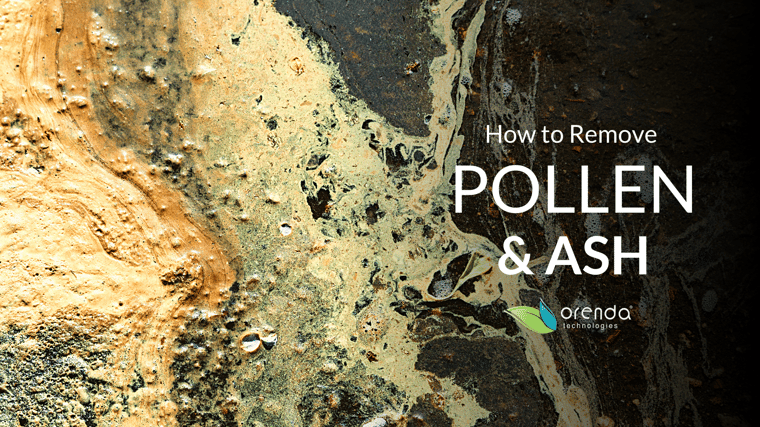 All of these contaminants can contain phosphates, and it just depends on how fast those phosphates are in solution in the water. For instance, if you regularly clean out the leaves in your pool, there may not be much time for the leaf to be oxidized enough for the phosphates in its cell walls to get into your water–and kudos to you for proactive pool care.

The point is that these kinds of contaminants get into your pool whether you like it or not. And unless you have an auto-cover on your pool all the time, there's not much you can do to stop it. Just do your best to keep physical debris out of the pool, and be sure your pool is well circulated, filtrated, and has good chemistry.

In our experience speaking with customers all over the country, this factor is the change that most 20+ year veteran pool professionals are most frustrated by. And for good reason. 20 years ago (or so) phosphates were hardly ever found in tap water. Now, almost every drinking water facility treats with phosphates of some kind. And it's a good thing they do...we just have to deal with them in our pools. It's a small price to pay for the benefits that phosphates can have in our drinking water.

Phosphate-based sequestering agents are used to prevent corrosion or scale formation in the pipes. They also help facilities filter out metals that may be in the water already. Both are positive things for the health and safety of our tap water. Yet they are a nuisance in pool chemistry.

And it's not just municipally-treated tap water that contains phosphates. According to the Water Research Center:

“Phosphates exist in three forms: orthophosphate, metaphosphate (or polyphosphate) and organically bound phosphate. Each compound contains phosphorous in a different chemical arrangement. These forms of phosphate occur in living and decaying plant and animal remains, as free ions or weakly chemically bounded in aqueous systems, chemically bonded to sediments and soils, or as mineralized compounds in soil, rocks, and sediments.”

Translation: phosphates are found in soil, which is a combination of broken-down rocks (with phosphorus in them), and decaying plant and animal remains. So when water matriculates through the ground, it is likely to absorb phosphates that you will have in your well water.

Why do phosphates matter in pools?

It's surprising how many sources online repeat the idea that phosphates are somehow irrelevant. The paraphrased reasoning behind this thinking is that with enough chlorine, algae will be prevented, so who cares about phosphates? As if adding more chlorine and algaecides are a better way of delivering great water quality than removing things from the water.

We disagree. That kind of thinking is diametrically opposed to our philosophy. So if you ask us how to improve water quality, we want to remove things from the water. We believe in minimalism and simplicity. We want the purest water possible–not a chemical cocktail so harsh that it forces water to look good even if it isn't good.

Related: How to implement the Orenda Program

Now keep in mind that we manufacture phosphate remover products (PR-10,000 and CV-700), and we do not hide our bias. So let's get specific on what we believe about phosphates.

If chlorine could oxidize and remove phosphates, phosphate removers would not need to exist. But phosphate removers are widely used by pool professionals and homeowners all over the world. It's hard to ignore the immediate improvement in water quality and chlorine efficiency. But why? What does removing phosphates actually do for water chemistry?

Say you're struggling to hold a free chlorine level in your pool. Most chlorine demand contaminants are non-living organics, followed by reproducing living contaminants (sanitizer demand) like algae. Both reduce chlorine, but the difference is that non-living oxidants do not reproduce. Algae do. According to renowned chemistry expert Richard Falk, algae growth is directly correlated to phosphates and can be mitigated by regularly removing phosphates to keep their level to a minimum (below 500 ppb).

This is why most attempts to clean up a green pool wind up with the pool consuming a huge amount of chlorine and taking the free chlorine down to zero overnight–yet the pool might not be clear. When the nutrients are available in the pool, algae can be killed and new generations can reproduce every few hours. So you didn't just kill one generation of algae when you dumped in that chlorine and algaecide. You killed multiple generations until the chlorine was depleted. Our Green Pool Cleanup procedure is gaining popularity because we don't just shock the pool with chlorine, we remove the phosphates too. 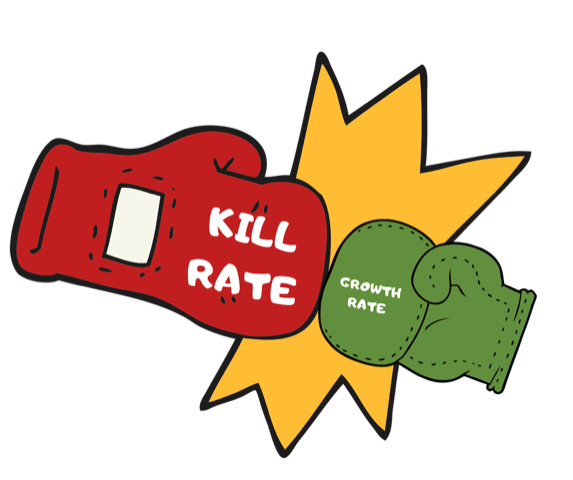 Again, to reiterate: removing phosphates will not kill algae, nor will it prevent algae. Low phosphate levels just minimize the growth/reproduction rate. Sanitization is essentially a battle between the kill rate (of the sanitizer) and the growth/reproductive rate of the contaminant. The Orenda Four Pillars of Proactive Pool Care try to address both sides of this equation.

Phosphates are virtually unavoidable because they are found in certain pool chemicals, tap water, and natural sources. And there are several types of phosphates that can be in swimming pools. While many people think phosphates are no big deal, we disagree, because we can dramatically simplify pool care by removing them from water, and keeping the levels below 500 ppb. Consider phosphate removal as part of your pool maintenance routine.

1  Of all the research we have done (dozens of articles, videos, and peer-reviewed journals), we have not been able to find a clear answer on why chlorine can interact with condensed phosphates but not orthophosphates. And even then it is not so clear. But we do know that condensed phosphates break down in sunlight into orthophosphate from our own experiments leaving buckets of water out in the sun after testing zero phosphates, only to come back hours later to find phosphates present. There is abundant information on organic phosphates and chlorine–specifically about pesticides in chlorinated water. But those should not be in swimming pools, so we did not invest the time to fully explore that. If you know specifics on how chlorine interacts with inorganic phosphates, please contact us!