Our Fourth and final Pillar is to minimize cyanuric acid (CYA). Maintaining CYA at a manageable level can be a struggle, and we realize that. But CYA has a major impact on chlorine efficiency. It can be summarized in two words: avoid over-stabilization. This article will explain what CYA is, why we use it, how it gets into our water, and how to manage it to prevent over-stabilization.

Action Step: Keep your CYA to a minimum to avoid over-stabilization.

What is CYA and why do we use it?

CYA is short for Cyanuric Acid–also called conditioner or stabilizer. CYA is a chemical used to protect chlorine from direct sunlight. Direct sunlight can break down chlorine in a matter of hours. So without protection, chlorine does not last very long in outdoor pools. Since indoor pools do not have direct UV exposure to the sun, CYA stabilization is unnecessary. And for bromine-treated water, CYA is not compatible and offers no benefit either. It’s really just for outdoor chlorine pools.

CYA is a hexagon-shaped molecule with three places that chlorine can attach to. They are three Nitrogens, which can form weak bonds with chlorine. Without getting stuck on specifics, just know that chlorine can attach and detach as needed. We like to think of CYA as a floating raft with a big umbrella on it, with three handles. Three chlorines can grab onto the raft and be protected from sunlight, and let go of the raft when needed to sanitize or oxidize something.

How CYA gets into swimming pools

There are basically two ways CYA can be introduced to water:

The Benefits of Chlorine Stabilization

CYA serves an important purpose, and at low levels, it is very beneficial. It does not take much CYA to protect free chlorine from sunlight and provide adequate stabilization. As mentioned earlier, direct sunlight breaks down chlorine rapidly. It has a half-life of about 45 minutes, which means half your chlorine will be wiped out by the sun in 45 minutes. Another half will be gone after only 90 minutes. So there is no doubt that some stabilization has a benefit for the staying power of chlorine. The chart below that illustrates the benefit that low levels of stabilizer can have for chlorine's longevity in direct sunlight: 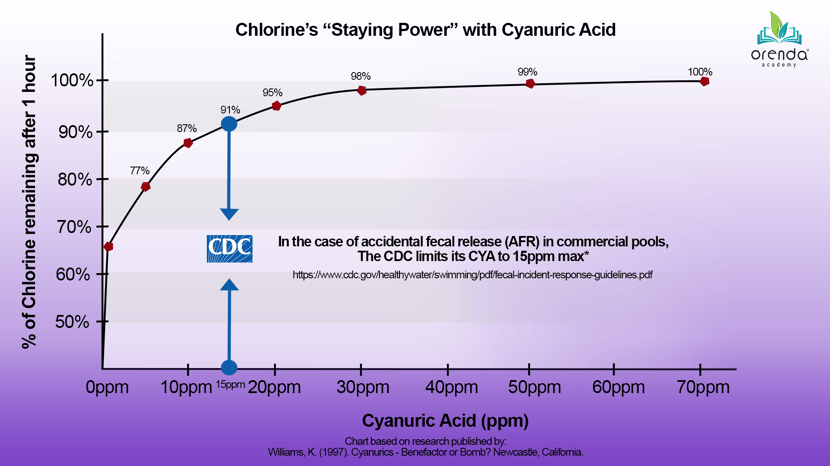 As you can see, at just 10 ppm CYA, 87% of the chlorine still remains after 1 hour. This is a dramatic improvement already, compared to unstabilized chlorine (which would have only 50% after 45 minutes!). 98% of chlorine remains after 1 hour at 30 ppm CYA. Beyond that, the benefits wane and the problems take over.

The problem, however, is not stabilization, it’s overstabilization. You see, while water evaporates and chlorine gets used up, CYA does not. It just stays in your water. And if you keep adding it, CYA just accumulates.

If you use a non-stabilized form of chlorine, like liquid sodium hypochlorite (bleach) or cal hypo, overstabilization should not be a problem, because CYA is not constantly being introduced. Overstabilization is a problem with stabilized chlorines like dichlor and trichlor. These forms of chlorine are more than 50% cyanuric acid and increase CYA at a fairly alarming rate.

For example, in 10,000 gallons of water, just one pound of Dichlor or Trichlor raises CYA 6-7 parts per million. That adds up very quickly. A good example is trichlor tabs. Say you use one pound per week (roughly 2 tabs) in a 10,000 gallon pool. Assuming no dilution, in just 10 weeks, you will have increased 60-70 ppm stabilizer in the water! Our fourth pillar of proactive pool care is about avoiding overstabilization by keeping CYA to a minimum. Low levels of CYA, 30ppm and below, give you the most benefit of sunlight protection while limiting the detriment to chlorine efficiency. Speaking of detriment, let’s talk about the downsides of CYA.

Too much CYA weakens (slows) chlorine

There is an abundance of scientific research available on cyanuric acid and its impact on chlorine1. In summary: the higher the CYA, the weaker the chlorine, and it’s almost at an exponential rate. Let's quote renowned water chemistry expert Richard Falk:

“The primary oxidizing and sanitizing compound is Hypochlorous Acid (HOCl), while Hypochlorite Ion (OCl-) and isocyanurate compounds (chlorine attached to CYA) have orders of magnitude lower oxidizing or sanitizing capability.” – Richard A. Falk

You might be astounded at how dramatic the impact of CYA is on chlorine. If you recall, the strength of chlorine is proportional to the percentage of the strong form of chlorine, Hypochlorous Acid, versus the weak form of chlorine, Hypochlorite Ion. Without any CYA, at a 7.5 pH, you have about half and half. The lower your pH, the higher the percentage of strong chlorine. Just small amounts of CYA plummet that percentage of Hypochlorous Acid. Check out the chart below that compares the normal HOCl to OCl- equilibrium without CYA, versus with CYA.

So, there really is no comparison as you can see. CYA dramatically plummets the percentage of strong chlorine (HOCl). What do you think that does to your sanitizer's strength? What does that do for the killing power of chlorine, as discussed in both Pillar 2 and Pillar 3? Clearly, the higher the CYA, the weaker the chlorine.

And if 7.5% of CYA is your minimum Free Chlorine, how about a maximum CYA? That ratio is 20:1, meaning 20ppm CYA for every 1 ppm of Free Chlorine. We didn't make it up, we're just sharing the information.

Or how about for disinfection? If there is an accidental fecal release (AFR) in a commercial pool, the CDC’s recommendation is a maximum of 15ppm CYA. Why? Because achieving disinfection of diseases like Cryptosporidium and Giardia requires a certain amount of contact time (CT) with chlorine. With CYA over 15ppm, disinfection becomes not only impractical, but it also becomes virtually impossible. Sure, you could do it, but the levels of free chlorine and time that would be needed are insane.

CYA Impacts the LSI Balance too

As if its impact on chlorine were not enough, there's something else you should know. Cyanuric acid has some buffering capacity, due to its ability to take and release hydrogen. Remember those three nitrogen bonds that form weak connections with chlorine? Yeah, they can also form weak connections with hydrogen, which means CYA is a buffer. It's called cyanurate alkalinity. In order to correctly calculate the LSI, the formula calls for the carbonate alkalinity, not the total alkalinity. To calculate carbonate alkalinity, we must deduct a portion of the CYA level in our water from the Total Alkalinity. Don't worry, if you use the Orenda App, this math is all done for you. If you don't the rule of thumb is to take 1/3 of your CYA ppm, and subtract it from your total alkalinity ppm.

If you want to be exact, the factor depends on the pH of your water, and now we're careening down a deep rabbit hole the size of a canyon. See what happens when we start talking about CYA? There's so much to cover because CYA can control a pool...let's...let's just move on now. Sorry.

So now that we know the effects of CYA on chlorine and the LSI, what can be done to reduce CYA? What if your pool is already over-stabilized?

How to reduce Cyanuric Acid

If your pool is over-stabilized, let's correct the problem. There are a few products that claim to remove CYA from water (with mixed results), and for those of you with water restrictions, reverse osmosis may be an option. But without a doubt, the safest, easiest and most affordable way to remove CYA is to drain some water and refill with fresh water. Dilution is the best solution in our opinion. This can include backwashing more, doing periodic drains or bleed offs, etc. 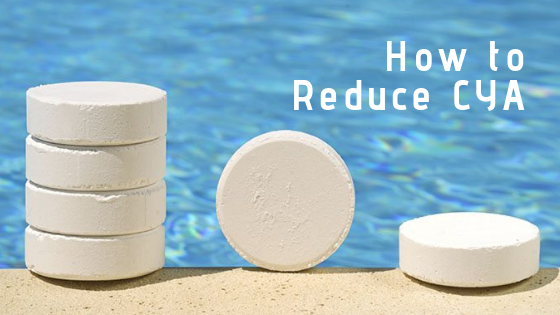 The math is easy too: want to cut your CYA level in half? Drain half your pool and refill it...well, it will be close anyway. Be aware that CYA also can absorb or adhere to pool finishes. We have heard of many cases where the pool has been drained and refilled, and there’s already a CYA level in it. That happens because the CYA was stuck to the walls. It’s wild.

So let’s wrap this up. The proactive strategy is to never let CYA accumulate too much in the first place. Use non-stabilized chlorine, like liquid chlorine or cal hypo, and if you choose to use stabilizer, use a small amount and stop adding any more after that. Keeping CYA to a minimum is Orenda’s Fourth Pillar of Proactive Pool Care.

Here is a list of some of the sources we used for this article:

And here are some of our other related articles on the Orenda Blog: