What kinds of phosphates might be in a swimming pool? There are several variations, and this article will outline some of them. Mainly, we want to illustrate that some phosphate compounds will not show up on an orthophosphate test kit.

Phosphates are compounds made of phosphorus and oxygen. The most common base phosphate unit is PO4. In simplified terms, phosphates can be derived as esters or salts of phosphoric acid.

In swimming pools, we care about phosphates because they are food for reproducing contaminants like algae. Phosphates indirectly increase chlorine demand and interfere with chlorine efficiency. Because of this, removing phosphates to keep their levels below 500 ppb (µg/L) is our third pillar of proactive pool care.

There are too many variations of phosphates to name, so let's divide them into two main subcategories: organic and inorganic phosphates.

Organic phosphates (or organophosphates) are esters of phosphoric acid. The phosphoric acid becomes an ester when it binds to a hydrocarbon. It's now carbon-based, hence the term organic.

According to the National Institute of Environmental Health Sciences (a division of NIH), organophosphates are a key ingredient in about half of known pesticides and nerve agents. If you have pest control spraying in your backyard, there is a decent chance that the pesticide contains organic phosphates. Then the question becomes whether or not the pesticide gets into your swimming pool or not. Hopefully, it's not a windy day...

Organophosphates get into swimming pools through decaying plant life, like leaves, pine needles, acorns, and other once-living flora. If you routinely remove leaves and debris, they should not be a major contributor to your phosphate levels, but left in the pool for weeks on end, organophosphates will get in your water. We do not know of a way to measure how much of a factor organic phosphates are, however. So let's not dwell on them and focus on what we can measure. 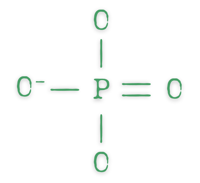 Orthophosphates are basically the building block of condensed phosphate compounds. They are made up of a single PO4 unit, which can bind to other things (like metals).1

Most swimming pool test kits measure orthophosphates only, as orthophosphates are the most common type of phosphate found in swimming pools. They are also a nutrient for algae and other organisms to reproduce. To be clear, removing phosphates does NOT kill organisms; it just supplements chlorine for improved efficiency in sanitization.

Orthophosphates are found naturally in the environment and in water. They are also added to certain fertilizers, which we will touch on later in this article.

A simple way to think of condensed phosphates is that they are variations of orthophosphates connected to one another. There are too many types to name all of them in this article. We'll focus on two forms of condensed phosphates: polyphosphate (chain), and metaphosphate (ring). There are other variations of these that form the common sequestering agents used in swimming pools and in drinking water treatment facilities.

Polyphosphates are based on orthophosphates linked together in a chain-like structure. At least two PO4 units together, sharing one common oxygen between them. The longer the chain, the more variations are available. 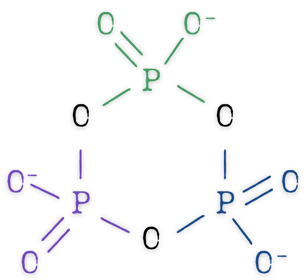 Other variations of inorganic phosphates

Here is a good list of more inorganic phosphate compounds. They can be found in all sorts of industries and uses around the world. If your swimming pool sequestering agent is phosphate-based (as most of them are), it is an inorganic phosphate of some kind. Eventually, it can break down into an orthophosphate. And this breakdown can lead to confusion when using PR-10,000 because sometimes phosphate levels appear to stay the same, or even increase. Here's why.

How do phosphates get into a swimming pool?

Decades ago, phosphates were not really an issue in pools. Perhaps nobody knew about them, or perhaps so few phosphates ever got into our water that the issue was negligible. In either case, times have changed, and phosphates today are one of the most prevalent issues swimming pools must deal with.

Let's look at the three most common ways that phosphates are introduced to swimming pools. You will find that the products we use, and the tap water we drink (and fill our pools with) have changed.

As mentioned several times already, sequestering agents (metal and scale inhibitors, stain preventers, startup chemicals, etc.) are often phosphate-based. They are condensed phosphates, usually. There are exceptions to this, like our chelating agent SC-1000, which contains zero phosphates.

So if you sequester metals or minerals to prevent stains or scale, be aware of this. And to be clear, phosphate-based sequestering agents work well. They would not be as popular as they are if they did not work. All we're saying is to be aware that a phosphate remover like PR-10,000 will eventually wipe them out. They will not stay in your water long if you're using a phosphate remover, and the metals bound to them will go free.

Natural contamination is a broad term that includes bathers, nature, and fertilizers. Basically, anything that can get into your water that you did not intentionally add. We hear of major phosphate issues near golf courses and vineyards (fertilizers). We also hear of high phosphates shortly after the gardeners or landscapers work around the pool (fertilizers). How about soils that wash in from rainstorms, and decaying plant life, like grass clippings and leaves? They all contain phosphorus.

Another major contaminant, in certain regions of the country, is soot/ash from wildfires. If the sky is hazy and you can smell smoke, you can bet high amounts of phosphates and carbon are getting into your pool.

Then bathers themselves. We excrete sweat and other bodily fluids that can contain phosphates, but more likely it's from the dirt and soils on our feet and hands. Sure, these are small factors compared to fertilizers and sequestering agents, but nevertheless worth mentioning. Someone even brought up laundry detergents that can clean swimsuits, though most laundry detergents nowadays no longer contain phosphates.

As mentioned earlier, phosphates are found in drinking water because drinking water treatment facilities intentionally add sequestering agents or other phosphate compounds to the water. Depending on the facility and the type of infrastructure it has, the use of phosphates can change.

For instance, if the system has old metal pipes, they may use one type of phosphate compound to inhibit corrosion. If corrosion is not a concern, scale might be, in which case a sequestering agent to inhibit scale formation in the pipes may be used. Or maybe the concern is metals in the water itself, which need to be filtered out. Again, a type of sequestering agent can be used to help with the screening of metals out of the water. It totally depends on what your drinking water plant is adding.

In any event, ever since the Flint Michigan water crisis in 2014, virtually every drinking water facility in the U.S. treats the water with some form of phosphate. And that's not a bad thing if you think about it. Phosphates are healthy for us, great for watering plants and lawns, and beneficial for the longevity of the pipes. The nuisance begins when that water gets into your swimming pool.

And let's not forget about well water. Natural percolation of water through the ground is sure to dissolve phosphorus in the soil and put it into the water table. Put it this way, in our experience, we have never tested zero phosphates in well water. Maybe it can happen, but we have yet to see it.2

It seems like any molecule containing P, O, and sometimes H can be a type of phosphate. We are not chemists, so we have done our best to simplify this into orthophosphates and condensed phosphates (of which orthophosphates are the building blocks).

What we did not talk much about in this article is why phosphates are so important to remove from water. For more on that, read our Third Pillar of Proactive Pool Care, or take our free Orenda Academy, Four Pillars™ program. In short, keeping your phosphate level below 500 ppb makes water quality easier to manage.

1  While orthophosphates can bind to certain metals, they do not sequester metals. Condensed phosphate compounds and phosphoric acids themselves can.

2  If you have well water and no phosphates in it (and can prove it), please contact us and let us know! We want to learn from it.