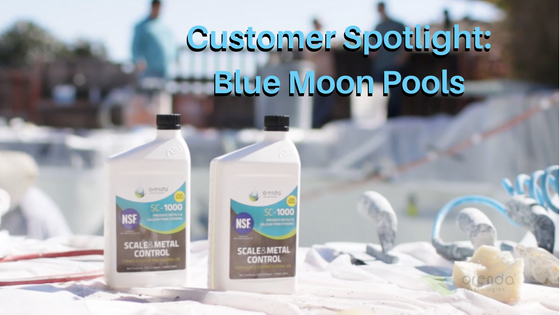 Pioneers of the calcium-based startup method 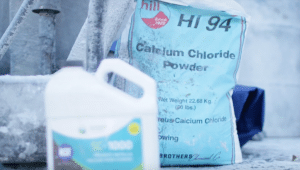 For years prior to meeting Orenda, Lupe Mariscal and his company, Blue Moon Pools, were doing their best to protect new pool plaster surfaces from the beginning. They were adding a few pounds of calcium at a time–while the pool was filling–to get the calcium levels up over 200 ppm. They couldn't add calcium too fast, however, because the calcium levels would get too high in such a small amount of water that it would cloud up and fall out of solution. In other words, if they added calcium too fast, they would over-shoot the LSI, and it could lead to scale.

Blue Moon Pools crews were pre-dissolving calcium in buckets, letting it cool, then pouring it into the pool with only approximately 200-300 gallons in the bottom.  In San Diego, where Blue Moon Pools is located, it works well... but it may not be enough in a cold climate like the American Northeast.

If this sounds familiar to you, it should. Blue Moon Pools were the pioneers of what we have adopted as The Orenda Startup™.

We owe most of the credit to Lupe and his company for bringing this idea to our attention. We did not come up with the idea of adding calcium as a pool fills; in fact, it has been tried for many years, but adding calcium too early caused scaling and calcium fallout. That's where SC-1000 comes into play. Lupe and his team tried SC-1000 because it can be added to the pool at the beginning of the fill-up process, which means calcium can begin to be added both sooner and faster.

The Orenda App also helps Blue Moon Pools know exactly how much calcium the pool will need, based on the tap water chemistry. Yes, Blue Moon tests every customer's tap water and records the results.  It fits right in with the fact that Blue Moon Pools document and photograph everything.

They document and photograph everything 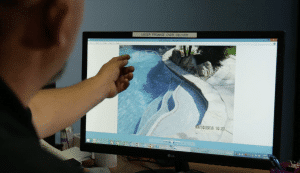 This is the single biggest differentiator we saw with Blue Moon Pools. Lupe showed us his computer, which has a folder for every job they have done in the past 16 years or so. Every folder has photos of the pool before, during, and after. Not just a few photos, but photos from multiple angles. Photos of the field survey that his employees fill out. Measurements, pre-existing conditions (like broken tile, or a cracked concrete deck), and anything else is documented thoroughly. This way, they have a record of every job, front to back.

When we got to a job site prior to filming our interview with Lupe, his supervisor was already there, taking pictures and writing notes on a clipboard. We strongly encourage anyone who remodels or even services pools to keep a log photos as well.

Documenting everything allows Lupe to control his costs, be more accurate in quoting customers pools, and more efficiently schedule his plaster crews. If they know the variables before they arrive, they will be better and faster on the job site. His people know what to look for, and can identify problems before it's too late. Sure, it takes more time and effort up front, but it has dramatically reduced warranty work and call-backs.

Plasterers that also do startups

Blue Moon Pools is unique from most plaster applicators we have met in the country. They devote extra time and people to filling the pool the proper way. Most applicators clean up, turn the water hose on and leave. We get it; the business of plaster application depends on how many jobs can be done in a week. That said, taking the extra time is something Lupe has chosen to have his company do, so they can control the outcome better. It's very impressive.