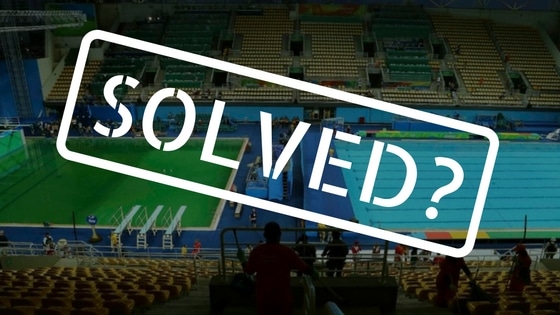 This article is a follow-up to our last article about the Rio Olympic diving pool turning green overnight. Regardless of what happened in Rio, we at Orenda looked at the situation as a great opportunity to share knowledge, and apply it to a current event. What we have discussed are known, established practices in the aquatics industry. Our objective has been to simplify the conversation for everyone reading our website. It's a lot to absorb, and we encourage the discussion.

For the mystery of the green Olympic diving pool in Rio, officials announced that a maintenance person mistakenly dumped over 160 liters of hydrogen peroxide in the pool, thinking it was the right thing to do. It remains unclear if they thought it was a different chemical, or if they genuinely believed hydrogen peroxide belonged in a chlorine pool. It is also unclear if hydrogen peroxide in the pool is the only reason for it turning green, given the myriad of other reasons given already; reasons that also could have contributed to the problem.

Let’s put this new information in context, so we can try to make sense of what happened in Rio. If this latest information given to the public is true, one thing is for certain: those pools were not safe for people to be using.

What is Hydrogen Peroxide?

When chemicals conflict, the reaction and results are what we need to pay attention to. In the case of putting hydrogen peroxide in a chlorine pool, the reaction is:

Translation: hydrogen peroxide neutralizes chlorine. Without chlorine (or active hydrogen peroxide acting as a sanitizer), bacteria and other contaminants can pollute a pool in short order. The initial response from the Rio event staff was 'algae', which is starting to sound more plausible now. It's really hard for algae to grow so fast with proper levels of chlorine. But without a sanitizer, algae can reproduce every 3-6 hours.

This is not the only example of conflicting chemicals in the pool business. Here are some others to look out for:

Bromine and chlorine. Both of them are effective sanitizers for pools, but when mixed together, the pool can turn brown under certain circumstances. You may have heard that it is possible to convert a chlorine pool into a bromine pool, but not vice versa. This is because adding chlorine to a bromine pool converts the used-up bromine (bromide) back into free bromine. When you add bromine to a chlorine pool, on the other hand, the bromine does not go away but builds up over time, creating a chlorine demand. Therefore, when you shock the pool with chlorine, the residual bromine will convert the chlorine into, you guessed it, bromine. So when professionals test the water, it will indicate that there’s no chlorine, when there’s actually bromine.

Acid directly in chlorine. Pouring acid into liquid chlorine can cause a dangerous reaction. That said, when properly introduced, chlorine can be stabilized with cyanuric acid. Just don't mix them directly in high concentrations.

Trichlor and cal-hypo or bleach. This can cause a dangerous reaction. Yes, they are all forms of chlorine, but they are incompatible to use together. Never mix any types of chlorine together.

Sodium Bicarb/Soda Ash and Calcium Chloride. If you have ever added a pH increasing chemical (like bicarb or soda ash) around the same time as calcium chloride, you know that it clouds up completely. This is because of how calcium interacts with carbonate ions, carbon dioxide and Hydrogen. It makes a frothy, white reaction that can cloud up your pool for hours or more.

It is important to know that these side reactions are not regulated by the EPA or NSF. There is currently no requirement to label products in a way that discloses such interactive risks or byproducts.

It appears the staff in Rio allowed a mistake to get out of control. By adding hydrogen peroxide, they wiped out their sanitizer, and as a result, the pool turned green. The lessons here are pretty obvious.

All information provided is intended for educational purposes and is not implied to replace consultation with a qualified pool professional. It is recommended that all information from this or any other source is to be performed assuming individuals performing these functions will consult local state and federal requirements before you act upon it in any way. While this site attempts to provide information that may be relevant to you, no guarantees are made that some relevant information will not be missed. We recommend you consult a local pool professional before acting.

Get our mobile App